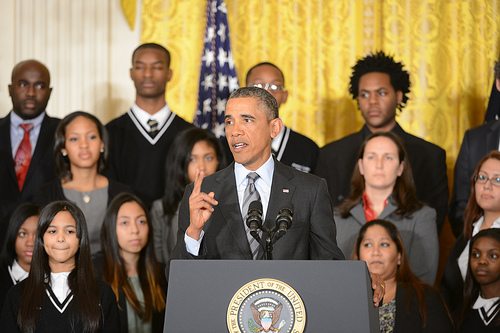 US president Barack Obama has announced initiatives aimed at sustaining the nation’s infrastructure, and in particular its energy supply and coastal and flood protection, as well as better predictions regarding rising sea levels.

The president’s State, Local and Tribal Leaders Task Force on Climate Preparedness, made up of 26 officials who have been working since last year to produce the proposals, will involve the cooperation of multiple federal agencies.

The task force has particularly looked at the prevention of droughts, the consequences of storm surges and other methods that will reduce the damage caused by an environment undergoing dramatic change.

A government study published earlier this year concluded that the nation’s energy supply was in particular need of guarding against climate change. Rising temperatures would see surges in demand, while the ability to deliver power would be under strain as extreme weather conditions damaged power lines and stations.

In response, the Department of Agriculture announced it would be awarding $236.3 million (£138m) to eight states to improve the sustainability of energy services. It also announced plans to help rural areas suffering with drought – which has become an increasingly common problem facing some states in the US.

The US Geological Survey has also announced it will be spending $13.1 million (£7.7m) on developing advanced three-dimensional mapping data that would allow states and cities to plan against natural disasters and other weather-related problems.

The initiatives have also assessed issues relating to the prevention of diseases. A recent guide, published by the Centres for Disease Control and Prevention, titled Assessing Health Vulnerability to Climate Change lists ways in which complex “climatic factors (like temperature, humidity, precipitation, extreme weather events, and sea-level rise) can directly or indirectly affect the prevalence of disease.”

These initiatives come as part of Obama’s general climate change programme, where he intends to cut the nation’s general carbon emissions by moving away from fossil fuels and increasing restrictions on emissions.

The new strategy involves a plan to cut emissions by 30%, with potential economic benefits ranging up to $82 billion (£42bn).