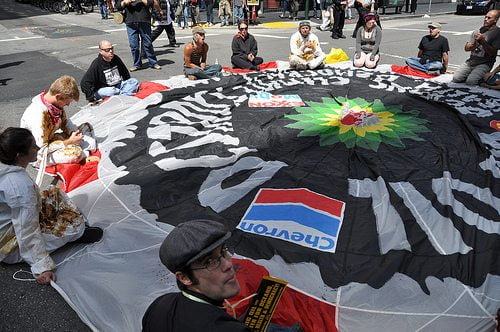 This week, the global oil and gas industry is celebrating International Petroleum Week (IPW) – an “annual thought-leadership event for influencers and decision-makers from the oil and gas industry”. Pollutocrats*, here is some free thought leadership for you: stop wrecking our planet, harming its people and destroying our future prosperity.

Adam Smith perfectly described the natural outcome of such gatherings and our inability to prevent them in a democracy: “People of the same trade seldom meet together, even for merriment and diversion, but the conversation ends in a conspiracy against the public, or in some contrivance to raise prices. It is impossible indeed to prevent such meetings, by any law which either could be executed, or would be consistent with liberty and justice.” Quite.

IPW will explore such progressive ideas as: oil and gas developments in the Arctic; future investment in Asia-Pacific, Iraq, Kurdistan and the eastern Mediterranean; and whether we are heading for a golden age of gas. Despite the ubiquity of climate change at the World Economic Forum in Davos and other international events recently, there’s no room on the agenda for our fragile environment or sustainability at IPW.

Present will be big oil: BP plc, Chevron Corporation, ExxonMobil Corporation, Royal Dutch Shell plc, Total SA and ConocoPhillips Company. These are not the biggest oil and gas companies in the world, which are the state-owned national oil companies (NOC) of Saudi Arabia, China and Russia.

However, they are the largest publicly-owned corporations, so the ones we can potentially influence through share ownership. They are also the ones you would hope have some ounce of humanity left, living in free and democratic societies as their boards do, alongside some common purpose with their fellow countrymen. Naive and idealistic, we know.

Just as a reminder, here’s a little rundown of the industry’s contribution to global environmental, social and governance affairs, courtesy of Wikipedia**.

BP has been involved in several major environmental and safety incidents. Among them were the 2005 Texas City Refinery explosion, which caused the death of 15 workers and resulted in a record-setting OSHA fine; Britain’s largest oil spill, the wreck of Torrey Canyon; and the 2006 Prudhoe Bay oil spill, the largest oil spill on Alaska’s North Slope, which resulted in a $25m civil penalty, the largest per-barrel penalty at that time for an oil spill. Source.

Chevron has been involved in several controversies and environmental and safety incidents. In 1950, then Standard Oil was convicted of criminal conspiracy for their part in the great American streetcar scandal. From 1970 to 2000 they evaded $3.25 billion in federal and state taxes through a complex petroleum pricing scheme. In 2012, a large fire due to aging equipment and lack of oversight erupted at a Chevron refinery in Richmond, California. In Ecuador, Chevron has been involved in an ongoing class action lawsuit filed by indigenous residents. Source.

ExxonMobil has been subject to numerous criticisms, including the lack of speed during its cleanup efforts after the 1989 Exxon Valdez oil spill in Alaska, widely considered the number one spill worldwide in terms of damage to the environment. ExxonMobil has drawn criticism for funding organisations that are sceptical of the scientific opinion that global warming is caused by the burning of fossil fuels. Questions have been raised about the legality of the company’s foreign business practices. Critics note that ExxonMobil increasingly drills in terrains leased by dictatorships. The company has also has been the target of accusations of improperly dealing with human rights issues, influence on American foreign policy, and its impact on the future of nations. Source.

Shell has been criticised for its businesses in Africa, notably in relation to protests of the Ogoni in 1995. In 2004 Shell overstated its oil reserves, resulting in loss of confidence in the group. The presence of companies like Shell in the Niger Delta has led to extreme environmental issues in the Niger Delta. In Magdelena, Argentina, Shell was responsible for the largest oil spill that has ever occurred in freshwater in the world. A number of incidents over the years led to criticism of Shell’s health and safety record, including repeated warnings by the UK Health and Safety Executive about the poor state of the company’s North Sea platforms. In the beginning of 1996, several human rights groups brought cases to hold Shell accountable for alleged human rights violations in Nigeria. Shell announced its $4.5 billion Arctic drilling program in 2006 by using drilling rigs Kulluk and Noble Discoverer. Source.

In 1998 the Total SA Company was fined €375,000 for an oil spill that stretched 400 kilometres from La Rochelle to the western tip of Brittany. The AZF chemical plant which exploded in 2001 in Toulouse, France. On 16 January 2008, Total was required to compensate all of the victims of the pollution caused by the sinking of the ship Erika. Total is being implicated in a bribe commission scandal which is currently emerging in Malta. Despite the European Union’s sanctions against the military dictatorship Myanmar, Total is able to operate the Yadana natural gas pipeline from Burma to Thailand. On 16 December 2008, the managing director of the Italian division of Total, Lionel Levha, and ten other executives were arrested… for a corruption charge of €15m to undertake the oilfield in Basilicata on contract. In April 2010, Total was accused of bribing Iraqi officials during former dictator Saddam Hussein’s regime to secure oil supplies. Total has been a significant investor in the Iranian energy sector since 1990. Total is suspected of concealing the source of its oil imports from Iran, [where] in 2013 a case was settled that concerned charges that Total bribed an Iranian official with $60m. Source.

According to the Political Economy Research Institute, ConocoPhillips ranked 13th among US corporate producers of air pollutions. In 2003, ConocoPhillips was named as a defendant in a lawsuit brought by Green Alternative, an environmental group based in the former Soviet republic of Georgia. The suit claimed that a number of foreign oil companies colluded with the Georgian government to induce authorities to approve a $3 billion pipeline without properly evaluating the environmental impact. In June 2011, ConocoPhillips China Inc, a wholly owned subsidiary of ConocoPhillips, was responsible for a series of oil spills in Bohai Bay. Source.

The charge sheet is long and goes on and on. And on. All the above ignores the industry’s not inconsiderable contribution to climate change and air pollution, with the concomitant health problems of cancer, respiratory, heart and skin disease.

It ignores the industry’s less than subtle efforts to undermine public understanding of, and confidence in, climate science. Or its considerable skill at bullying governments, bribing politicians, demanding vast tax subsidies (far, far in excess of renewable subsidies), and attempting to kill off the nascent clean energy industry.

It ignores the carbon bubble that massively overvalues these companies, threatening pensions and economies across the developed world.

It also ignores the industry’s role in encouraging the world’s wealthiest nations to fight illegal wars, overthrow fledgling democracies and prop up dictators to support commercial interests. This leads to a world living under the shadow of terrorism.

Will it make a difference when the NOCs have such a large market share in the global oil and gas market? In some small way, yes. And every little helps. As for NOCs, many Middle Eastern governments see huge opportunities in solar energy and so are doubly blessed by both the fossil and solar ages. They just need to get over a few internal instabilities. China is slowly beginning to understand the importance of clean air in its smog-afflicted megacities.

Big oil, we can but applaud your evil genius. Like the backstreet drug dealer, you got us hooked on your product and liquidated any rivals, again and again. When you couldn’t get your own way legitimately, you threatened then harmed or killed those who stood against you.

Never in the history of human commerce was so much owed by so few corporations to the detriment of so many innocent people.

If only all those thousands of brilliant and decent scientists and engineers you employ had devoted their intelligence, industry and subsequent wealth to making the world a better place, rather than recklessly profiteering from its ongoing degradation.