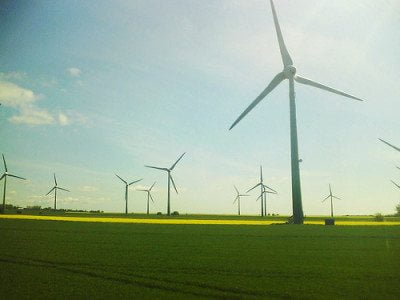 Community Windpower Ltd are delighted to reinforce their ‘Commitment to Scotland’ by reconfirming the Memorandum of Understanding (MOU) with Wind Towers (Scotland) Limited (WTSL) to supply Scottish Turbine Towers for their Scottish Wind Farms.

Following the successful delivery and installation of the Scottish Turbine Towers on Community Windpower’s Millour Hill Extension in North Ayrshire, Community Windpower are reinforcing the MOU with Wind Towers Limited for their forthcoming projects, retaining and creating highly skilled jobs at the Campbeltown facility.

The original MOU, signed in 2013, is being bolstered by the commitment for over 100 tower sections which will be featured at the approved Sanquhar and Sneddon Law Wind Farm projects and would be used on the 19 turbine Aikengall IIa extension scheme if approved.
These are ‘shovel ready’ projects which would be annually generating over 450GWh of Green Energy by 2018, ahead of the Scottish Government 2020 targets.
Work has already commenced on the Sanquhar scheme in Dumfries and Galloway, with the access track and enabling works being undertaken by local contractor AMD Contract Services.

The tower sections which would be manufactured at the turbine tower facility in Campbeltown, Argyll and Bute, would be brought to mainland Scotland by either road or container ship.

Lesley Black, Head of Sales at Wind Towers (Scotland) said “Significant progress has been achieved in 2015 and the prospects for 2016 are encouraging assuming the capture of a satisfactory sales pipeline.  In line with this WTS have increased production capacity and increased the workforce from 120 to 150. The business plan for 2016/17 and beyond requires production of some 120 towers a year to maintain the current headcount, of which the sale of towers in this MOU for 100 sections signed with Community Windpower plays a very significant part”.

Lesley continues, “Because WTS has preferred supplier status for all Community Windpower sites, timely clarification on the prospects and timing for the Aikengall IIa project is keenly anticipated by WTS”.

n announcement on Aikengall IIa is expected early this year and if approved, would see one of the highest producing onshore wind farms in the UK, generating over 75MW and 232GWh of electricity, being built by Scottish Contractors and featuring Scottish turbine towers.