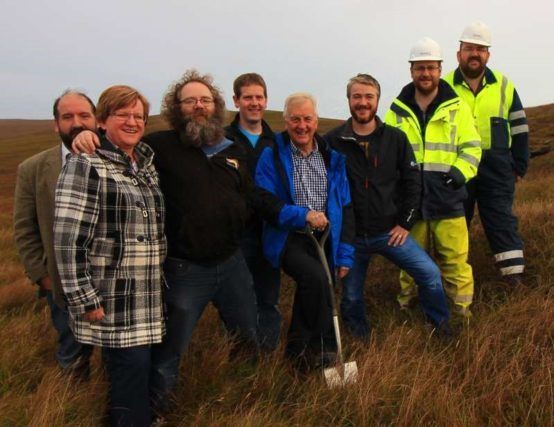 The Garth Wind Limited community renewable energy company is about to switch on their wind turbine blades following support from Triodos Bank and REIF Scotland, this comes after 14 years of development.

The project, which has been set up entirely by members of the local community, will bring in a substantial income for the Island of Yell over the next 20 years. The five turbines, constructed by Enercon, each measure 45m in height, with 22m blades, will have the capacity of producing 4.5 megawatts of power when they are fully commissioned.

Overall the wind farm will displace power made by burning fossil fuels in Lerwick Power Station, and will reduce Shetland’s carbon emissions by up to 12,000 tonnes of CO2 every year.

The construction phase was completed in five weeks and turbine installation in 22 days – an extraordinarily quick time for an island based wind project.

Norrie Cruickshank, Relationship Manager at Triodos Bank said: “This is a fantastic community renewables project, one that we are delighted to be a part of. This installation gives one of the most outer islands of the Shetlands a chance to reduce carbon emissions, provide new jobs and opportunities to local people, and provide an added income for the community group. It’s a project which represents our values at Triodos Bank perfectly, offering both an environmental and social return.”

Caught in 14 years of development limbo, the project was finally greenlit after careful planning which included ecological considerations such as animal and bird studies, peat properties and water courses. The development also suffered stall backs after discovering poorly worded land documents dating back to 1933 which prevented the project from moving forward Following full cooperation from the community and local landowners, the issue was finally resolved many years later paving the way for the Island of Yell to get another renewables project running.

Garth Wind Limited is a fully owned subsidiary of North Yell Development Council which is a registered Scottish Charity, and is one of the oldest and successful Community Development Organisations.

“A huge amount of hard work, professionalism and dedication has been shown by the various teams in order to overcome the challenges of any construction project taking place late in the year in such an exposed location. The wind farm will bring opportunities into our community for years to come” said Andrew Nisbet, Secretary of the North Yell Development Council.

Scottish Government Minister for Business, Innovation and Energy, Paul Wheelhouse MSP, said: “The Community and Local Energy sector is a key priority for the Scottish Government. Under our Community and Renewable Energy Scheme (CARES) we provide support to projects including the Garth Wind community development. This is a great example of a local community taking advantage of its own natural resource for the benefit of the whole community and that is something we very much want to encourage in our newly published, draft Scottish Energy Strategy. The development itself will provide a long-term income that will support the community and local projects for over 20 years.

The next step of the construction phase is the completion of the Grid connection works and commissioning. It’s expected that the wind turbines will be fully operational and feeding into the National Grid by March 2017.