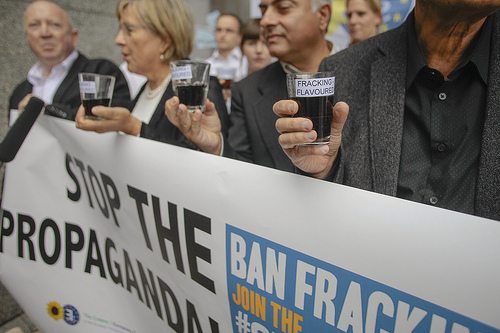 Senior cabinet ministers, including the chancellor George Osborne and energy secretary Ed Davey, could see fracking developments begin on their doorstep, with licenses for exploratory drilling granted in their constituencies.

Research by environmental group Greenpeace has revealed the political constituencies in which the 176 onshore drilling licenses issued by the Department of Energy and Climate Change (DECC) are located.

It says that up to 13 members of the cabinet, also including William Hague, Theresa May, Michael Gove and Jeremy Hunt, could see drilling in their communities in the next few years.

In June, the British Geological Survey claimed that shale gas reserves in the UK could be much larger then expected and that bringing fracking to the country could lead to a decrease of energy bills.

However, there are many concerns over the environmental impact of the controversial process, including suggestions that it could cause minor earthquakes.

Speaking about protests at a site in Balcombe, Sussex, where fracking firm Cuadrilla has begun ‘exploratory’ drilling for shale gas, Friends of the Earth campaigner Brenda Pollack said, “People are right to be concerned about fracking. It threatens their environment and quality of life and will mean more climate changing emissions are pumped into the atmosphere. And there’s plenty of evidence that it won’t lead to cheaper fuel bills.”

Despite such concerns, George Osborne remains a firm supporter of fracking, and has announced a series of tax breaks that he hopes will make Britain the “leader of the shale gas revolution.”

If fracking does come to Tatton, Osborne’s constituency, then it may be a sight the chancellor is already familiar with. In March, Greenpeace protestors erected mock drilling rigs outside his constituency office, to show the UK “what Osborne’s fracking nightmare looks like”.

The Lib Dem energy secretary Ed Davey, whose Kingston and Surbiton constituency may also be drilled in the future, has also said he “loves” fracking.

The protests in the Sussex village of Balcombe continue, with local residents attempting to blockade the site in a conflict that has seen numerous arrests.

Greenpeace energy campaigner Lawrence Carter said, “MPs should brace themselves for a significant voter backlash if they allow fracking to be forced on their constituents. Balcombe is just the beginning– people won’t take the disruption of their communities and countryside lying down.

“Even senior Tories, who have thus far been the most vocal cheerleaders of fracking, are beginning to recognise that they could pay a price at the polling booth if they lend their support to it.”

In a YouGov poll published on Monday, 41% of almost 2,000 people said that Britain should start extracting shale gas by fracking, while 33% said that it should not. However, only 25% said they would want fracking to begin in their local area.