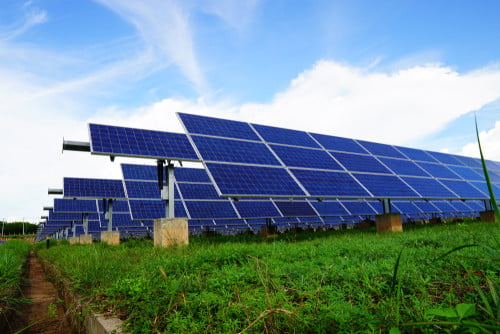 There are a number of things that we need to do to lower our carbon footprint. One of the most important steps we can take is changing our energy consumption habits. According to the Energy Information Administration, around 21% of all energy is consumed in residential areas. This means we could reduce our carbon footprint by over 6% if we could lower household energy consumption by just 30%.

One option to consider is installing an automated solar tracking panel. You can even build one yourself.

Technological innovations of the last decades provoked great changes to the energy industry. Once people didn’t even know what electricity was. However, now they are striving to make the electricity consumption safer and more renewable (green). Some people say that we must take into account the actual and potential damage to the environment, which some power plants are capable of causing. Water power plants aren’t necessarily much better. They significantly influences aquatic ecosystems where they are built. This causes changes in the behavior of the underwater life – both plants and alive creatures of the particular area and sometimes may cause the full distinction of the local ecosystem.

The same story when talking about nuclear power plants. The 6.6 point earthquake (Richter Scale) of April 11, 2011, in Fukushima make it clear that safety measures are not always enough to prevent the disaster. That day the humanity holds the breath for a long time as the earthquake caused the malfunctioning of cooling systems of three atomic reactors that potentially could cause the next “Chernobyl” disaster.

Taking into account all the previous experience, failures, and benefits of renewable sources of energy, industries around the world are looking at solar power. The potential of solar panels technology is really amazing, as one little field of such panels is capable of providing electricity to power a small airport. Furthermore, the productivity of solar panels directly depends on the amount of solar energy received along the day. The maximum value of electricity generation is only reached when the working surface of the solar panels is positioned perpendicular to the direct solar rays. When taking this into account, many craftsmen would already ask themselves if they know the way to make the solar panel mechanisms to be oriented directly towards the sun all along the day. Surely this is possible with linear actuators technology of Progressive Automations manufacturer, dedicated to providing the fully automated linear motion anytime without even human presence nearby. This company provides linear actuators for solar panel trackers that are able to function all the day long and move your solar panels according to the blueprint made in advance and preprogrammed inside the microcontroller attached to the solar power panel to control its daily performance.

Taking into account the particular trajectory of the daily movement of the sun, the optimal location of a fixed solar battery in azimuth is an angle of about 150°. Practical experiments held by engineers show that the solar module fixed in such a position (in the direction passing in the middle between the points of sunrise and sunset) in the evening and morning time loses about 75 percent of the maximum energy volume that can be possibly generated. In addition to the daily movement in the direction from east to west, the Sun additionally makes seasonal movement between north and south – during the year the change is about 46°. If the panel is oriented to the midpoint of the average annual trajectory of the Sun in the north-south direction, the generation loss from the maximum possible amount will be about 8.3-9 percent.

Electric linear actuators attached to the solar panel systems provide the required dynamics to make them adjustable according to the solar positioning. Using actuators for the moving trackers ensures the automatic tracking of the sun position throughout the daylight hours and the orientation of the solar panels attached to them, as well as provides for the correction of the angle of the panel depending on the season. Installing the solar tracker system allows customers to achieve an increase in electricity generation by 30-40 percent when compared to solar power plants using fixed solar panels.

Using the electric linear actuators of Progressive Automations for the construction of automated solar panel systems allows to make this construction more effective and make it almost fully autonomous and requiring solely rare maintenance service along the operating year.

There are a lot of steps that we can take to fight climate change. One of the easiest steps we can take is to use solar tracking panels. You might be surprised by how much they lower our carbon footprint.