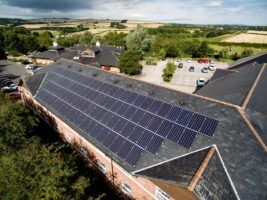 Solar Power Project From Whitbread Up For Energy Award

Hospitality group Whitbread have doubled the solar power of its Premier Inn hotels in under twelve weeks leading to the project being shortlisted for a national award.

Reading-based Anesco, one of the top 100 cleantech companies in the world, worked with Whitbread to design and deliver the initiative. It has seen 871kWp of solar PV installed on the roofs of 42 Premier Inn sites across the UK, reducing Whitbread’s carbon emissions and saving the group thousands of pounds on energy bills.

The project has now been shortlisted for Energy Efficient Partnership of the year, as part of The Energy Awards 2016.

Whitbread has been working with Anesco for the last six years to make operations at its Premier Inn hotels more energy efficient. In this time Anesco has helped Premier Inn to save over 1,200 tonnes of CO2, reduced its energy expenditure by £240,000 and has installed 1,455kWp of solar systems – enough to power 720 homes for a year.

“We have been working closely with the team at Whitbread for some time now, looking at solutions to help them achieve their commitment to improving their energy efficiency and reducing their carbon footprint.”

What this project demonstrates is the effective partnership that we have built together and how it is making a difference.

After assessing over 700 sites across the country, Anesco’s team pinpointed 42 hotels that could be turned around quickly. With all of the roofs being different heights and shapes, every single hotel had to have its own unique solution. Variables such as building orientation, weather and height also needed to be taken into account.

Each system has been designed to maximise the energy generated, ensuring Whitbread gets the best return on its investment. The systems are also being monitored 24/7 by Anesco’s in-house O&M service, Anesco Meter, ensuring they continue to operate at their optimum capacity and any faults are quickly spotted and rectified.

The winners of The Energy Awards 2016 will be unveiled at a ceremony being held in London on 30 November. For more details please visit www.theenergyawards.com