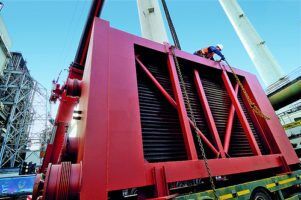 The UK To Build The World’s Largest Biomass Plant

Teeside plant will use 2.5 million tonnes of wood chip to power 600,000 homes

A collaboration between a UK biomass company, an Australian investment banking and financial services group, and a Danish pension fund, will result in the world’s largest biomass plant being built at Teesport in the North East. The £650 million plant will create 600 jobs during its construction and 100 permanent jobs once operational in 2020 and many more in related supply industries.

More homes and businesses are turning to Biomass in order to combat fluctuating fossil fuel prices and to provide heat and hot water to their homes and premises in a more eco-friendly way.

The new plant, to be situated on land close to the main southern dock at Teesport on the River Tees near Middlesbrough, will dwarf the power outputs of other biomass plants already operating in the North East area. Generating 300 megawatts of electricity, enough to power 600,000 homes, the plant will be fed around 2.5 million tonnes of wood chip per year primarily imported from the United States and Europe.

It’s claimed the Tees REP (Renewable Energy Plant) will make a 1% contribution to the UK’s legally binding renewable energy target of 15% of all energy consumed by 2020. The new plant is expected to save around 1.2 million tonnes of CO2 gasses each year by replacing gas and coal with renewable energy for power creation.

The new plant is guaranteed a fixed price for the electricity it will produce through the government’s Contract for Difference (CfD) arrangement.

The original plan for the new plant was approved by Redcar and Cleveland Borough Council back in 2008 and given government consent the following year with costs then estimated at £500 million. Alterations in the plant design and a change in the funding structure caused delays and an increase in cost to £650 million.

There’s a true multinational flavour in the construction and ownership of the Tees REP; Australian investment bank and financial services company the Macquarie Group and Danish pension fund PKA are funding the project with British biomass company MGT Power.

Construction is being handled by a consortium of Spanish contractor and power generation facility constructor Técnicas Reunidas, and South Korean global engineers and constructors Samsung Construction and Trading (SCT).

Boost for the North East

Not surprisingly, such a huge plant will bring many benefits to an area already well represented through biomass power production. For example, Teesport will gain from the increased sea traffic from vessels delivering the wood chip to the plant and complements the recent developments in the port’s infrastructure made by its owner, PD Ports.

The local authority, Redcar and Cleveland Borough Council, are delighted with the Tees REP. Councillor Dale Quigly talked glowingly of the benefits of such a huge undertaking in the area, saying it will: “bring high quality jobs to the people in our borough”.

Careful use of renewable sources

The woodchips fuelling the Tees REP are produced primarily from the by-products of the timber sawing industry and are sourced from commercial forestry which is then re-established, thus ensuring sustainability. MGT are pledging to conduct regular third party audits to ensure sustainability is maintained by their wood chip suppliers.

There are some greenhouse gasses associated with producing and transporting wood chips from the US and Europe to Teeside, but these are far lower than the equivalent gasses produced in, for example, coal production. MGT quote figures of 180 gCO2e/kWh for biomass compared to 800 to 1000 gCO2e/kWh for coal.

The North East: a biomass centre

Biomass power production is certainly catching on in the UK with the North East being a particular focus. There are plants either operational or under construction in areas such as Billingham, County Durham, other parts of Teeside and Northumberland.