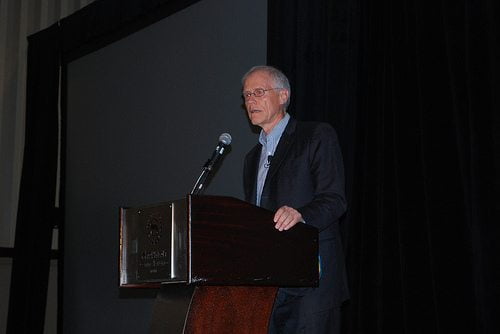 ‘We are stealing the future, selling it in the present, and calling it GDP’

Paul Hawken is a Californian civil rights activist, environmentalist, businessman and author. Fortune named him the “original hippie entrepreneur” in 2002, and he coined the phrase “restorative economy”. But it is in the headline quote that he perfectly encapsulates the flaw of our current economic model and the critical importance of sustainability as we approach National Ethical Investment Week 2013.

Hawken is of Swedish and Scottish descent and wrote his first book about Findhorn, an ecological centre in Scotland in 1976. He is neighbour of one of Blue & Green Tomorrow’s first interviewees, Stewart Brand. Following The Magic of Findorn, he wrote The Next Economy, Growing a Business and The Ecology of Commerce which inspired the much-missed Ray Anderson of Interface.

Those books were then followed by Natural Capitalism: creating the next industrial revolution and Blessed Unrest: how the largest movement in the world came into being and why no one saw it coming.

In the latter, he wrote, “It is axiomatic that we are at a threshold in human existence, a fundamental change in understanding about our relationship to nature and each other. We are moving from a world created by privilege to a world created by community.

“The current thrust of history is too supple to be labeled, but global themes are emerging in response to cascading ecological crises and human suffering. These ideas include the need for radical social change, the reinvention of market-based economics, the empowerment of women, activism on all levels, and the need for localized economic control.”

“There are insistent calls for autonomy, appeals for a new resource ethic based on the tradition of the commons, demands for the reinstatement of cultural primacy over corporate hegemony, and a rising demand for radical transparency in politics and corporate decision making. It has been said that environmentalism failed as a movement, or worse yet, died. It is the other way around. Everyone on earth will be an environmentalist in the not too distant future, driven there by necessity and experience.”

Hawken founded the Natural Capital Institute, which focuses on a database of activists and civil society organisations called wiser.org, and serves on the board of the Point Foundation (publisher of the Whole Earth Catalog), Centre for Plant Conservation, Conservation International, Trust for Public Land and Friends of the Earth. He has six honorary degrees and a very long list of public recognition, awards and admirers, including the Nobel Peace Prize winner and former Soviet president, Mikhail Gorbachev.

His quote, “You can print money to bail out a bank but you can’t print life to bail out a planet”, adorns the cover of our latest guide.

To understand him, we certainly recommend reading any or all of his books. You should also read his truly exceptional commencement speech at Portland University from which the headline and quote above are taken, but here are his closing remarks: “Ralph Waldo Emerson once asked what we would do if the stars only came out once every thousand years. No one would sleep that night, of course. The world would create new religions overnight. We would be ecstatic, delirious, made rapturous by the glory of God. Instead, the stars come out every night and we watch television.

“This extraordinary time when we are globally aware of each other and the multiple dangers that threaten civilization has never happened, not in a thousand years, not in ten thousand years. Each of us is as complex and beautiful as all the stars in the universe. We have done great things and we have gone way off course in terms of honoring creation…

“The generations before you failed. They didn’t stay up all night. They got distracted and lost sight of the fact that life is a miracle every moment of your existence. Nature beckons you to be on her side. You couldn’t ask for a better boss. The most unrealistic person in the world is the cynic, not the dreamer. Hope only makes sense when it doesn’t make sense to be hopeful. This is your century. Take it and run as if your life depends on it.”

National Ethical Investment Week only lasts seven days each year but the economy, society and environment we create through investment today will be with us for centuries to come. Future generations, such as those graduating in 2009 at Portland University, will not thank our generation and those that came before for what we have done in a few short decades to spend their inheritance and lay waste to nature and their tomorrow.