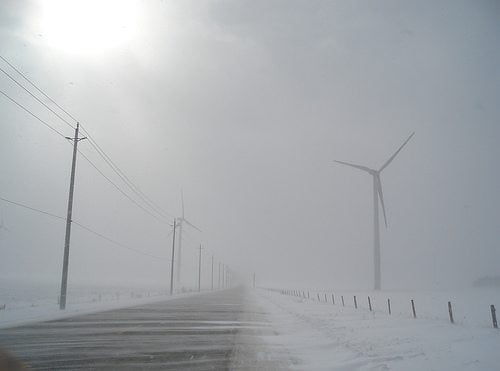 Wind providing ‘massive quantities’ of power during US cold snap

In some areas of the US, where below-freezing temperatures are driving up energy demand, the lights have been kept on thanks largely to the contribution of wind power, industry insiders have said.

Much of the country is still in the icy grip of the so-called ‘polar vortex’, a weather pattern made up of strong winds circulating around a low-pressure system, which has unusually broke away from its normal position over the Arctic to bring plummeting temperatures and severe disruption to North America.

Though forecasters are predicting that conditions will return to normal in most regions in the next few days, 50 cities set new record low temperatures on Tuesday.

The lowest recorded temperature of -37C, measured in Embarrass, Minnesota, is colder even than readings recently taken on Mars.

Natural gas usage has reached an all-time high as the US fought to meet heat demands, but in Texas it is renewable energy that has taken the credit for preventing a power emergency.

The state’s demand for electricity reached 57,277 megawatts (MW) between 7-8am local time on Tuesday morning, beating the 57,265MW record set during another cold spell in February 2011, according statistics from the Electric Reliability Council of Texas.

On Monday, the cold weather and unexpected shutdowns of some power plants forced the Texas grid operator to implement its emergency plan in order to meet demand. This demand remained high on Tuesday, but increased output from wind farms in West Texas allowed the state to avoid an emergency scenario.

AWEA, the national trade association of America’s wind industry, said that wind energy had also helped other states through the worst of the polar vortex, providing enough to supply 6m homes in the Upper Midwest and significantly lowering energy prices in New England.

“Most importantly, wind energy provided massive quantities of extremely valuable electricity when grid operators needed it most to meet demand from electric heaters and furnace fans”, Michael Goggin, senior electric industry analyst at AWEA, wrote in a piece for RenewableEnergyWorld.com.

“In several cases, wind energy’s output provided the critical difference that allowed grid operators to keep supply and demand in balance and the lights on.”

Goggin argued that the country’s struggle with the cold snap was evidence of the valuable role wind energy plays in diversifying the country’s energy mix.

He added, “Diversity inherently makes the power system more reliable by protecting against the unexpected failures that afflict all energy sources from time to time.”