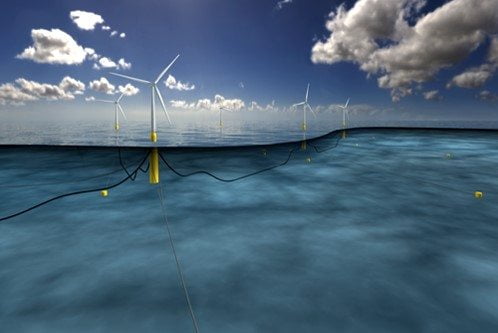 The world’s largest floating offshore wind development will be installed off the coast of Peterhead after the application has been granted a marine licence by the Scottish Government. It is expected that the Hywind Scotland development could power up to 19,900 houses.

Norwegian Statoil propose developing a pilot park of five floating 6 MW turbines which is to be located approximately 25km off the coast of Peterhead with a generating capacity of 135GWh of electricity each year.

Unlike conventional turbines, Hywind turbines will be attached to the seabed by a three-point mooring spread and anchoring system. The turbines will be connected by an inter-array of cables and an export cable will transport electricity from the pilot park to shore at Peterhead.

The Carbon Trust believe that floating wind concepts have the potential to reduce generating costs to below £100/MWh in commercial deployments, with the leading concepts such as Hywind, with even lower costs of £85-£95MWh.

“The momentum is building around the potential for floating offshore wind technology to unlock deeper water sites. The ability to leverage existing infrastructure and supply chain capabilities from the offshore oil and gas industry create the ideal conditions to position Scotland as a world leader in floating wind technology.”

Maggie McGinlay, Director of Energy and Clean Technologies at Scottish Enterprise said: “This announcement is fantastic news for Scotland’s renewables industry as a whole, but in particular our growing offshore wind supply chain. We’ve been working closely with our companies to directly link them with Statoil for some considerable time to ensure they are in the best position possible to take advantage of the significant opportunities we know this development will bring.

“This announcement is a clear indication that Scotland’s growing strengths in offshore wind are recognised at an international level, and we’ll continue to work closely with our supply chain to ensure they can capitalise on potential opportunities such as this, both here and overseas.”

Statoil’s executive vice president for New Energy Solutions Irene Rummelhoff said: “Floating wind represents a new, significant and increasingly competitive renewable energy source. Statoil’s objective with developing this pilot park is to demonstrate a commercial, utility-scale floating wind solution, to further increase the global market potential. We are proud to develop this unique project in Scotland, in a region that has optimal wind conditions, a strong supply chain within oil and gas and supportive public policies.”

Commenting on the granting of consent, WWF Scotland director Lang Banks said: “Successfully developing floating turbines could enable Scotland to secure even more clean energy from offshore wind in the future. With the right political support for offshore wind and other renewable technologies, Scotland is well placed to become the EU’s first renewable electricity nation by 2030.

“As we approach the Holyrood elections, we call on all political parties to set out their plans to create jobs and cut carbon by continuing to grow renewables in Scotland.”