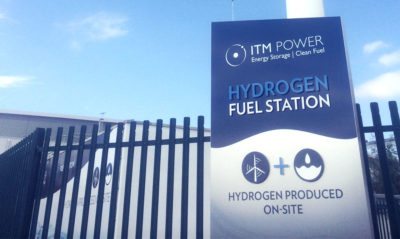 Good Energy, a renewable electricity company, has agreed to supply ITM Power with zero carbon electricity. The agreement comes after ITM Power launched its first public access hydrogen refuelling station at today at the National Physical Laboratory in London. There are currently 15 hydrogen fuelling stations in operation across the UK. The Government is helping to fund another 40 stations by 2020.

Juliet Davenport OBE, founder and chief executive of Good Energy said: “At Good Energy we’re proud to be working with ITM Power on this cutting-edge technology which can play a big part in the energy future of the world.

“The opportunities to work with ITM Power to see how we can integrate the transport, heat and electricity markets are really exciting, and we think we are a great fit to supply zero carbon renewable electricity for this inspiring venture.”

The companies are looking to supply renewable electricity to sites where hydrogen is produced through the electrolysis of tap water, meaning the fuel will be made with zero associated carbon emissions.

Good Energy, which owns two wind farms and seven solar farms, will supply more power when the generation of renewable electricity is greater than demand.

ITM Power currently has two public refuelling stations for hydrogen-powered cars, with a further four set to be opened before the end of this year.