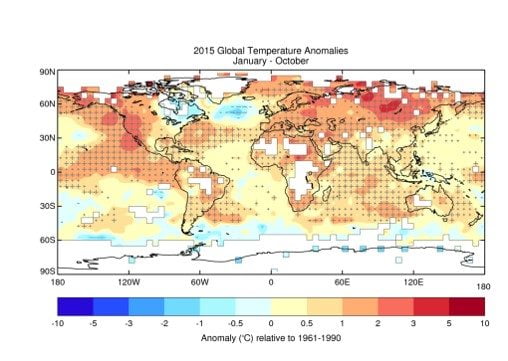 2015 set to be hottest year on record

This year’s global average surface temperature is likely to be the warmest on record according to data from the Met Office, and is expected to continue the trend showing 15 of the top 16 warmest years have happened since 2001.

Responding to the news on Wednesday, Friends of the Earth’s Andrew Pendleton said: “This is a resounding wake-up call from the planet to world leaders as they head to Paris for talks on climate change. Its message is that their efforts fall a long way short of what’s needed to prevent global warming from wrecking people’s lives.

“The UK Government’s actions ahead of crucial climate talks have been a disgrace. Since winning the general election, ministers have repeatedly gone out of their way to undermine investment in clean renewable power, while boosting investment in dirty gas and oil. This sends out all the wrong messages and will not tackle climate change.”