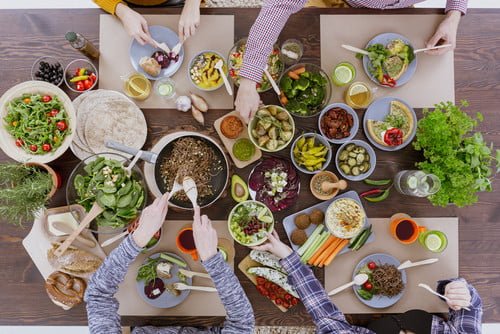 When most people think about helping the environment, their first instinct is to switch to a hybrid car and install solar panels. However, the meat industry is a bigger factor. It is estimated that livestock farming accounts for 20-50% of all manmade carbon emissions. People could help the planet by becoming vegetarians.

If we’re serious about reducing the impact of human behavior on the environment, then reducing our meat intake is the cheapest and simplest thing we can do to contribute to it. Every portion of chicken or beef that goes on to our plate, is a result of technology and land hungry farming system that depends on coal and oil. It spoils forests and pollutes air, seas, rivers and oceans.

Our animal breeding methods have now been recognized by the politicians, economists, scientists and the UN to be a major factor in causing several interconnected ecological and human problems. Fortunately, new breeding processes can help fix this. One study published by The Netherlands shows that new breeding practices can reduce environmental impacts by 1% a year. However, all animal breeding practices will continue to have some effect on the environment. Minimizing our intake of animal products can help fix this.

There are currently 1 billion people who are already not getting enough food and 3 more billion which will need to be fed in the next 50 years. It will be difficult to do this is climate change makes animal harvesting more difficult. it is high time that we rethink our relationship with these animals. In fact, there are several well-known athletes who have understood the importance of plant-based diet and are harnessing its true power for the benefit of their respective sporting endeavours. Let’s take a look at the top 5 reasons why a vegetarian diet is indeed an eco-friendly diet.

It’s a well-known fact that big animal farms create a lot of waste which leaches into the soil and causes a significant amount of groundwater pollution. This large-scale animal waste delivers a lot of harmful antibiotics, nitrogen and phosphorus into the lakes, rivers and other water bodies. In fact, the farm animals in the United States result in production of over 1 million tons of manure per day, which is 3 times what is generated by the entire US human population. You can read more about it in the article.

Any reduction in the animal protein demand automatically causes a lesser demand for the livestock. This livestock alone are responsible for 15% of greenhouse gases caused by the humans, because of methane gas released by the animals. A 2006 UN report revealed that cattle farming actually causes more amount of greenhouse gases than cars. The livestock are in fact the biggest contributors to the environment problems of today.

The large-scale animal farms are expected to deliver meat and related products in the quickest and cheapest manner, and hence must make the most of the space available to them. This results in creation of abusive conditions for the animals, wherein all of them are dumped in small cages and aren’t even able to move.

As majority of western animal farming is dependent on oil, the oil price hike in 2008 caused food riots in 23 countries. Every link in that food chain requires electricity, right from fertiliser production required for animal feed cultivation, to water pumped from deep underground, as well as fuel required for transportation of meat. Going by some studies, almost 1/3 of the entire fossil fuels produced in the US are allocated to animal agriculture.

Save the Planet by Going Vegetarian

Your diet has a big impact on your carbon footprint. You can help the planet considerably by becoming a vegetarian.