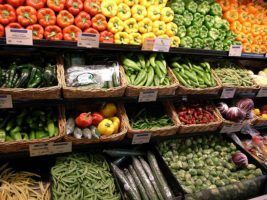 Are you serious about fighting to preserve the environment? There are a lot of things that we can to fight climate change. One of the most important changes we can make it changing our diet.

Too many people think that the only way that we can really fight global warming and save the environment is by limiting the amount of fuel that we consume. However, we can make a lot of headway in the war against climate change by switching to a diet that leaves a smaller carbon footprint. A vegetarian diet could make a big difference, but you need to eat the right foods.

Is a Vegetarian Diet the Key to Fighting Global Warming?

This is primarily because animal agriculture is responsible for a huge proportion of the world’s greenhouse gases and requires a large amount of water to sustain. Meanwhile, livestock excrement can also pollute lakes, rivers, and even the air.

One recent report revealed that the continuation of meat-heavy diets could see the environmental impact of the food system rise by up to 90% by 2050. Potential implications could include “dangerous levels” of climate change, as well as polluted waters, and irregularities in forest ecosystems and biodiversity. As a result, the researchers insist that adopting a plant-based diet “is one of the most powerful things you can do to reduce your impact on the planet over your lifetime”.

Thanks to meat-free brands like Quorn, and an abundance of vegetarian-friendly stores and restaurants, it’s never been easier to overhaul your diet. However, while meat, poultry, and seafood will never have a place on your plate, you could still be inadvertently consuming animal-infused foods and drinks without even realising. Here are some common foods vegetarians might not know they should be avoiding, plus a few tips on how to continue enjoying these foods on a meat-free diet.

Many popular cheeses are made with animal rennet, a combination of enzymes which is traditionally extracted from the stomachs of young calves. Parmesan, or Parmigiano-Reggiano, is always made from this substance as a consistent recipe is needed for the cheese to be recognised by its name. Grana Padano, Roquefort, Gorgonzola, Manchego, and Camembert also traditionally rely on the ingredient.

Animal rennet isn’t used in all cheeses, with veggie-friendly examples including paneer, ricotta, and cottage cheese. And thanks to the development of vegetarian and microbial rennet, it’s still possible to enjoy the types that are otherwise off-limits. For example, many supermarkets now produce their own vegetarian Italian-style hard cheeses—just look for a ‘suitable for vegetarians’ or ‘V’ label. Specialist brands are also keen to cater to the veggie market, while subscription services like The Cheese Geek give their customers the option to buy exclusively vegetarian cheeseboxes.

Plenty of breweries, including most British brands, use a fining agent called isinglass, which is made from fish bladders. This component filters out leftover yeast particles to remove cloudiness, leaving the drink clearer, brighter, and more attractive to consumers. Wine manufacturers often use fish oil, blood, bone marrow, and the fiber from crustacean shells for the same reason. To make things worse, it’s hard to know whether or not your drink includes these animal by-products, as information about their presence is not typically listed on labels.

But fear not—being vegetarian doesn’t mean going teetotal. You just need to get to know your brands. Swapping British beers for German labels is a good idea, as many of these brewers follow Reinheitsgebot, AKA the “German Beer Purity Law”. This rules that water, malted barley, hops, and yeast must be the only ingredients in any beer. What’s more, some variants from well-known brands such as Coors and Blossom Hill are already animal-free. To double-check before having a drink, consult the comprehensive Barnivore database.

Haribo, jelly babies, cola bottles, and other chewy sweets use gelatin as a gelling agent. This is a translucent, colourless, flavourless ingredient made by taking collagen from animal body parts—usually the skin, tendons, ligaments, and bones of pigs and cows. However, don’t be fooled into thinking that it’s only gummy snacks you have to worry about, as sweet treats like foam shrimps, marshmallows, and jelly all contain it too.

Veggie alternatives are often available, with M&S announcing earlier this year that it had decided to remove gelatin from all its Percy Pigs so their flagship sweets “can be enjoyed by everybody”. Next time you need a snack, look to this extensive list by PETA for animal-free inspiration.

You can eat as much pie as you like if you’re making it yourself, but be wary if you’re using a shop-bought pie crust, which isn’t usually made with butter. To save money and give their products a longer shelf-life, manufacturers tend to use lard—pig fat—instead.

It’s easy to spot a non-vegetarian pie crust as it will list ‘lard’, or occasionally ‘tallow’(beef or mutton fat) in the ingredients. However, pre-made vegetarian crusts are usually available nowadays, and you could have more luck finding a frozen one. As these last longer, they’re more likely to be made with butter or vegetable shortening, which shares many properties with lard.

There are some unexpected animal products in many popular dressings and condiments. For example, traditional Caesar dressing and Worcester Sauce are both made using anchovies, while Parmesan—and, therefore, animal rennet— is a key ingredient in pesto.

Again, there are plenty of veggie alternatives, including organic Worcester sauce and vegan Caesar dressings. Alternatively, simply use this list of 43 vegetarian condiment recipes to whip up a selection of your own.

You can make a lot of progress in the fight against climate change by following a vegetarian diet. However, you are going to need to do it carefully. Eat the right foods and make sure they are right for your body and leave a small carbon footprint.