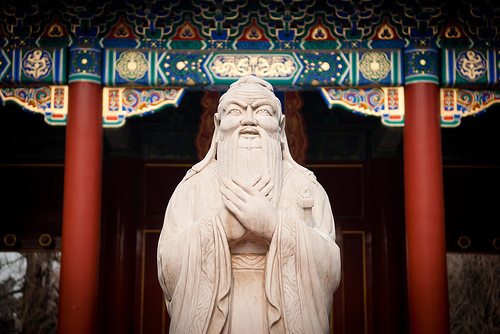 Cities are often criticised for being crowded, dirty places, over consuming and under providing. People are crammed in, and there they are left to build their lives, each fending for themselves.

The UK is lucky, with its large and frequent green spaces (London is the greenest city in Europe) and assumed superior welfare system, but not everywhere is like this, and we could still do better.

But how do you create the perfect city? Town planning is a tough job. You only have to look at places such as Milton Keynes and Stevenage – once visions of the perfect homes – or the garden city movement that famously spawned Welwyn Garden City. Heralded as utopian civil dreams, they are now laughable commuter hubs, soulless and sprawling. Maybe we should consider Confucius?

Confucianism is a social and ethical system, rather than a religion. I’m not saying we base our modern European cities on auspicious signs of success, or that with each layer of brick that goes down an offering is made, or that cardinal points should be the sole arbiter of where a road is positioned. But we can certainly learn from their approach.

Practical considerations such as the natural topography, land and water locations are perhaps less crucial now we do not have to defend ourselves from warring tribes or fetch our own water, but with every new build estate, flood warnings still important, the position of a supermarket crucial, and security a question that must be considered.

So a shiny new hospital that is in a place where pollution causes record respiratory problems; arts and culture provision so far from housing that no one can attend and benefit; a big central supermarket but no shops in the suburbs, resulting in withering localities. All of these are examples of focusing upon one element of a city structure whilst wholeheartedly neglecting another.

A Confucian approach considers the city as a body in which each aspect is an organ. Working together in harmony, they allow for a fully functioning city, not only operating successfully but enhancing the lives of people living there.

Each of these people are crucial to the place in which they live, contributing to the success of the city (the assumption being here that everyone wants to look after their home, which may be where this plan falls down today). The annual longevity ceremony where everyone in the community – top to bottom – gathers together in the interests of their city could be the modern council meeting.

They recognised that like the body, it could be sometimes suffering and sometimes happy. It all depends on whether the system is working. A city that is healthy and happy is one that works, and lasts – a sustainable city.

Listening to each element and responding to them is the only way to develop and thrive. I’m not suggesting that we negate practicalities and follow philosophy when it comes to town planning, but that perhaps there is more similarity and interaction than we realise.

Ultimately, a city that lasts is one that looks after its people and places – all of them – in sickness and in health. To do so, it must recognise the importance of each component part. Head to toe.