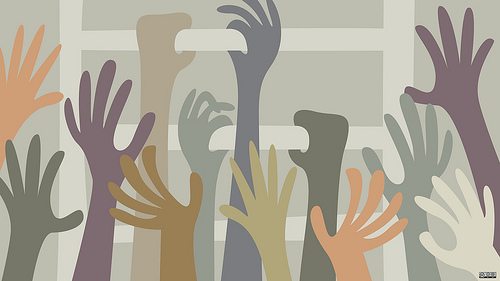 Many readers will be familiar with Maslow’s hierarchy of needs. This widely taught model suggests that humans achieve motivation in a series of stages, starting at basic physiological needs and peaking at self-actualisation. Abraham Maslow developed the theory in 1943 and it remains popular in sociology, management and psychology. The model could apply to investment.

Maslow’s argument was that each level of human needs had to be satisfied before progression to the next stage. He used this to describe how people are motivated in the 1954 book Motivation and Personality. 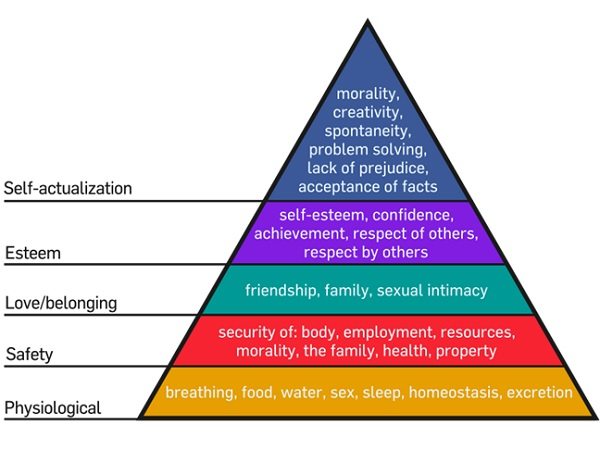 While new theories, such as attachment theory (dynamics of long-term relationships between humans), have become more widely accepted in recent years suggesting that the linear ranking and stages are not necessarily as sequential as Maslow argued, much of the thinking still applies.

It is useful way of thinking about all human activity. 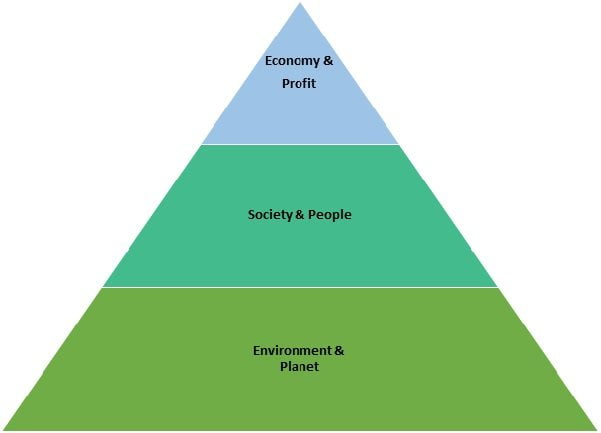 Investment is framed in terms of the top level only, what is economic or profitable.

This is the beginning and end of the discussion for many politicians, investors, commentators and financial professionals. Any impact on society, individual people, the environment or planet are secondary or simply non-concerns.

This is a bizarre way of thinking about long-term investment and human activity. Everything we do economically and for profit is built on a stable society and a viable planet. It would be strange to undermine the foundations that hold our economy up to make a short-term gain while creating a long-term loss.

Blue & Green Tomorrow’s motto is, “All things are connected” (Omnia coniuncta). Actions in any of the economic, social and environmental systems interact and cause unpredictable reactions in the other systems. Every action has an equal and opposite reaction.

Sustainability is often presented in these terms. As overlapping, circles with equal weight. 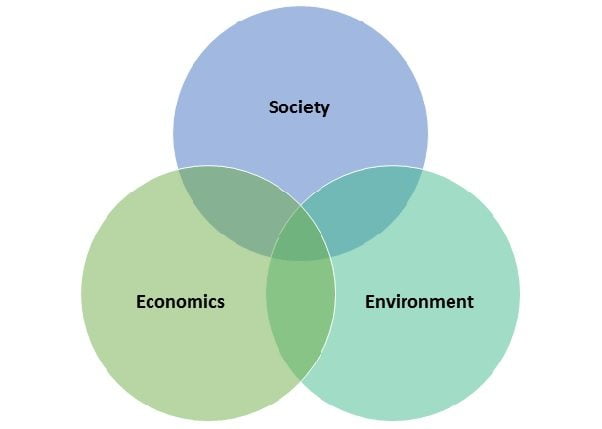 What we do in economics (invest, consume, trade) shapes society and the environment – we make profit today, and create losses tomorrow.

What we do in society (vote, marry, have children, fight) shapes the economy and the environment – what provides pleasure today, will ensure pain tomorrow.

What we do to the environment (mine, pollute, degrade, make extinct, terraform or conserve) shapes the economy and the society – we exploit today, but will pay a heavy price in compensation tomorrow.

The hierarchy is a more useful model to understand how the earth functions.

It is this foundation environment level that is under the most extreme stress. Pollution, resource waste/scarcity and over-consumption all harm the viability of the environment and everything which is built on it. In turn, this environmental pressure is creating distress for societies around the world and is storing up another economic crisis.

Some ill-informed and reckless individuals may argue that we can’t compromise economic growth to save the planet. It makes more sense to argue that we cannot jeopardise the environment we all depend on at a fundamental level, simply to secure short-term profit and growth.

Don’t misunderstand. The Earth itself is not under threat.

This fragile, pale blue dot will endure and continue its orbit of the sun until it is consumed by an expanding star in about two billion years, or hit by another massive object before then. If you go back two billion years, multicellular life had just emerged, so we probably won’t be around anyway. It is us and our families, our way of life and all sentient life on Earth today which is under extreme threat from economic inhumanity to society and the environment.

It’s time for mankind to grow up and realise that what we do to the Earth and others, we do to ourselves. Most irresponsibly we do it to the generations to come.

The environment is at the bottom of our hierarchy of investment needs. It has society above it and is topped by economic and profit concerns. This represents the order of priority for many politicians, investors, commentators and financial professionals.

This is as wrong-headed as it is unsustainable, irresponsible, unethical and reckless.

In the words of Kenneth E Boulding in Future Environments of North America in 1966, “With laissez-faire and price atomic, Ecology’s Uneconomic, But with another kind of logic Economy’s Unecologic.”