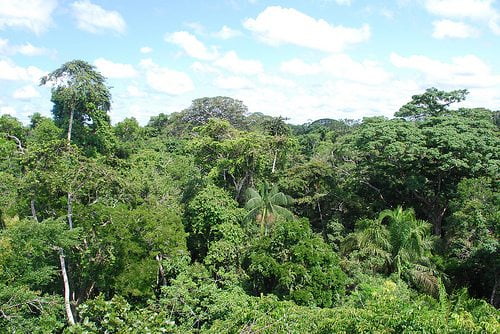 The Amazon rainforest naturally absorbs more carbon out of the atmosphere than it emits, according to a new study that underlines the importance of the threatened environment.

The Amazon is one of the greatest and most important ecosystems on the planet. It is estimated that about 10% of all known species live in the 5.5 million square kilometre rainforest.

However, the region – sometimes called “the lungs of the earth” – also provides an essential service that many take for granted. The Amazon’s trees remove considerable amounts of carbon dioxide (CO2) from the air, therefore lessening climate change.

Nevertheless, dead trees release the gas back into the atmosphere as they decompose. Because no one knew for certain how many Amazonian trees were dying of natural causes, scientists lacked certainty of the rainforest’s overall impact.

Lead author Fernando Espírito-Santo of NASA’s Jet Propulsion Laboratory spent years pouring over data and working in the field to come to this conclusion.

Using a variety of models, the team then found that in every scenario, carbon absorption by living Amazonian trees outweighed emissions from trees that had died naturally.

“We found that large natural disturbances have only a tiny effect on carbon cycling throughout the Amazon,” said Sassan Saatchi, a co-author of the study.

The study concludes that each year, about 2% of the entire Amazon forest dies of natural causes.

However, their calculations do not take into account human activities such as logging and deforestation, as these processes vary widely with changing political and social conditions.

A survey published in November found that deforestation in the Amazon went up by 28% between August 2012 and July 2013 – though most logging had been done illegally.

A separate NASA-led study, published in January last year, also linked the degradation of the Amazon environment to climate change.

Researchers suggested that a “megadrought” – attributed to sustained warming of Atlantic sea surface temperatures – had devastated 270,000 square miles of rainforest over five years.