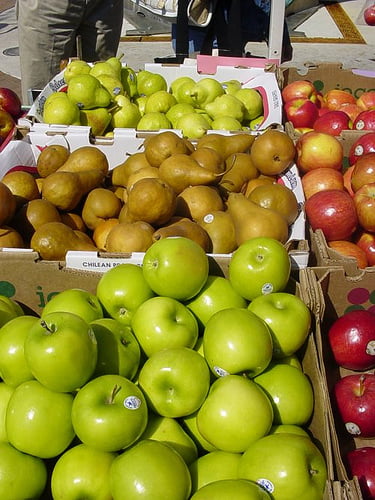 Apples are most likely to be contaminated by pesticides out of 48 of the most common fruits and vegetables, according to new research. Grapes, strawberries and celery are also at risk often.

The findings appear in the Environmental Working Group’s (EWG) ninth edition of its Shopper’s Guide to Pesticides in Produce – an educational attempt to raise awareness of pesticide use, by ranking the contamination levels in 48 varieties of fruit and veg.

The analysis of over 28,000 samples tested by the US Department of Agriculture and the US Food and Drug Administration have been compiled into two lists – the Dirty Dozen, which lists produce with the greatest amounts of pesticides, and the Clean Fifteen, which is a rundown of the lowest.

At the top of this year’s Dirty Dozen sit apples, grapes, strawberries and celery. Others on the list include spinach, sweet bell peppers, cucumbers, cherry tomatoes, imported nectarines, potatoes, peaches and hot peppers.

The guide also found that some baby food products in American stores in 2011 consisted of five pesticides including toxic organophosphates, methamidophos and acephate.

Making the Clean Fifteen list, pineapples, cabbage, avocadoes, corn, onions, papayas, mangos and asparagus are among the safest products currently on the market.

“They want to eat a diet rich in fruits and vegetables without eating too many pesticides. And they want to support local farms and agriculture that is better for the environment.”

You can download a PDF version of the guide or download as an app for your smartphone here.