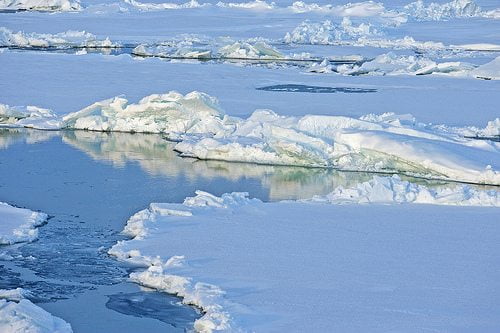 Scientists have found that the maximum extent of sea ice in the Arctic is lowering, with the melting season lasting five more days and the rate of decline continuing.

Research by NASA and the National Snow and Ice Data Center (NSIDC) has revealed that the peak level of Arctic sea ice this year is the fifth lowest on record, confirming the worsening trend in the region.

Arctic sea ice extent on March 21 was 4.80m sq km on average, about 730,000 sq km less than the typical levels between 1981-2010, with the Barents Sea and the Sea of Okhotsk showing levels well below the average.

Julienne Stroeve, senior scientist at NSIDC, said, “The Arctic is warming and this is causing the melt season to last longer.

”The lengthening of the melt season is allowing for more of the sun’s energy to get stored in the ocean and increase ice melt during the summer, overall weakening the sea ice cover.”

The researchers also found that Antarctic sea ice reached its annual minimum on February 23. It was the fourth highest Antarctic minimum on record.

Arctic sea ice extent reached a record low in 2012. Scientists have blamed greenhouse gas emissions for the melting and recently found that the ice-free season was lasting five days more every 10 years.

A separate study published in February revealed that the loss of ice meant that less sun heat was being reflected back into the atmosphere, causing the planet to warm faster still.