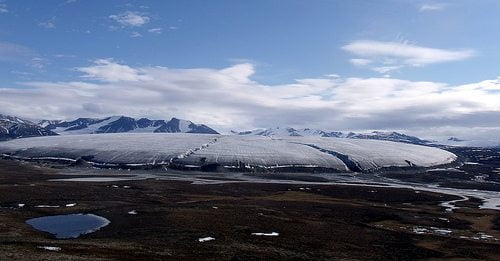 Temperatures in the Canadian Arctic are at the highest they’ve been for at least 44,000 years, and possibly even 120,000 years, according to a new study.

“The key piece here is just how unprecedented the warming of Arctic Canada is”, said Dr Gifford Miller, lead author from the University of Colorado at Boulder.

“This study really says the warming we are seeing is outside any kind of known natural variability, and it has to be due to increased greenhouse gasses in the atmosphere.”

The evidence for Miller’s claims come from an unusual source. His study examined over a hundred clumps of long-dead moss on Baffin Island to the north of Canada that had been buried until receding ice had recently revealed them.

Their findings indicated that the moss had been under ice for between 44,000 and 51,000 years. However, as radiocarbon dating is only accurate up to 50,000 years, the mosses could have died even longer ago.

The scientists reasoned that this was likely, as 44,000 years ago the Northern Hemisphere was in the cold grasp of an ice age. The ice age in question began 120,000 years ago.

The team used ice cores – cylinders drilled from the ice that show layers of snow laid down over time – in a similar way to using the growth rings in a tree to measure annual change. They hoped this could provide a better understanding of Baffin Island’s climate history.

They discovered that the last time temperatures on the island were as high as today was indeed around 120,000 years ago. All this shows that the current period of warming defies natural patters, the scientists argue.

“Although the Arctic has been warming since about 1900, the most significant warming in the region didn’t really start until the 1970s”, said Miller.

“And it really is in the last 20 years that the warming signal from that region has been just stunning. All of Baffin Island is melting, and we expect all of the ice caps to disappear, even if there is no additional warming.”

Ice coverage in the Arctic reached a record low in 2012 of 1.32m square miles, an 18% decrease from the previous record low measured in 2007.

A study published in August suggested that the Arctic could be ‘ice free’ by 2054, due to global warming.