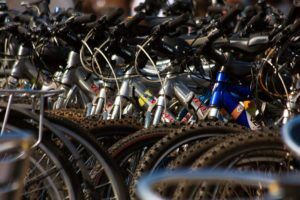 To reconfirm their enthusiasm for saving the oceans, pop legend Simon Le Bon and his model wife, Yasmin, will  kick off Blue Marine Foundation (BLUE)’s London to Monaco Bike Ride in style on Sunday.

Simon and Yasmin will blow the starting horn as a host of more than 50 riders set off from the Tower of London to raise half a million pounds for the UK-based marine conservation charity. A royal welcome awaits them in Monaco, where HSH Prince Albert II will greet them at the palace.

The money raised will help BLUE achieve its aim of protecting vast tracts of the world’s oceans. BLUE exists to combat over-fishing and the destruction of biodiversity – arguably the largest problem facing the world’s oceans – by creating large-scale marine reserves and developing models of sustainable fishing.

Simon Le Bon (the lead singer of Duran Duran and BLUE ambassador) explained why he is so passionate about supporting BLUE and the bike challenge:

The sea is a beautiful thing.

“I think we all grew up thinking it was perfect and untouchable and would always exist, but we know that there’s a disaster unfolding. Over-fishing has caused a terrible crisis. Now is the time to do something. The London to Monaco Bike Challenge will not only raise much-needed funds for BLUE’s conservation work, it’ll also raise awareness of the crisis our oceans are facing.”

Clare Brook, CEO of BLUE added: “Over the years, people have waded in mud, paddle boarded The Channel, and been photographed naked with fish to help us protect the oceans. Cycling from London to Monaco is the next exciting challenge and we are immensely grateful to all cyclists taking part for the real difference their efforts will make in saving our seas.”

Funds raised from the ride will go towards two specific projects that will contribute significantly to ocean protection. The first, in the Aeolian Islands north of Sicily, will address over-fishing and irresponsible tourism, and protect endangered marine species such as sperm whales and dolphins. The second is in the remote island of Ascension in the tropical Atlantic – home to extraordinary biodiversity including sharks, turtles and rare sea birds. Half of Ascension’s waters were closed to industrial fishing at the beginning of the year, but the Ascension islanders need to develop other sources of income on the island, particularly science and eco-tourism, so that more of the island’s waters (which cover an area nearly twice the size of the UK) can become a haven for the wonderful marine life to be found there.

HSH Prince Albert II of Monaco, who is the Founding Patron of the Blue Marine Yacht Club, and who will greet the riders at the end of their challenge said: “Oceans are more than ever at the heart of our common future. Although they are subjected to sustained pressures, they also offer infinite solutions and unparalleled opportunities, whether of an ecological or economic nature, energy or food related. Since 2012, my foundation and the Blue Marine Foundation have made an important unified commitment to help protect the world’s oceans, with a number of joint initiatives focused on the protection and management of the marine environment. The first London to Monaco Cycle Ride is therefore a wonderful opportunity to raise awareness on the necessity to protect our fragile oceans.”

The Four Chapters of the Challenge

Starting from the historic Tower of London and riding across Tower Bridge on Sunday 18th September, the riders will complete an impressive 1500km cycle ride over ten days. They will arrive in Monaco on 27th September where they will be given a royal welcome by HSH Prince Albert II of Monaco. The challenge will see them ride through three countries and over terrain that ranges from the gently rolling hills of Kent to the leg-burningly steep and picturesque Rhone-Alps in South Eastern France. Participants are able to join one of the three chapters or tackle the whole distance.

Chapter 1, London to Folkestone – The opening stage of this spectacular ten day cycle ride will lead riders away from the beating heart of London through rolling Kent countryside and into Folkestone.

Chapter 2, St Omer to Dijon – As the riders travel into France there will be warmer weather and the chance to test their endurance as this leg includes the longest stage of the entire ride – the 223km between St Quentin and Troyes, finishing in the Burgundy town of Dijon.

Chapter 3, Dijon to Gap – The riders remain at around 1000m of altitude until the last 5km, where they descend gently into Gap. Gap is the largest town in the Hautes-Alpes and synonymous with cycling, having hosted the Tour de France on 21 occasions.

Chapter 4, Gap to Monaco – The final stage of the ride will cut across the mountains, jutting out into the Mediterranean. The riders will navigate their way into Monaco and up onto The Rock of Monaco, home to the Prince’s Palace, while all around the town will be preparing for the annual Monaco Yacht Show.

Supporters Who Made the Challenge Possible

The London to Monaco Bike Challenge has been made possible thanks to the support of a number of partners. The challenge has been arranged in partnership with Winch Design, the award winning British superyacht design studio.Winch Design has a long-standing relationship with BLUE and has supported the charity through smaller initiatives in the past – including the design of the “Whale Room” at the Ice Hotel in 2012. William Blomstrand from Winch designed a room, which replicated the ribcage of a whale and a team went over to Sweden to carve the space to William’s winning design.

Andrew Winch, commented, “I’m passionate about the oceans and know that we must ensure the future of our seas. As a great supporter of Blue Marine Foundation, I wanted to make a real contribution to their wonderful work in celebration of our thirtieth year in business. The entire team at Winch design is inspired to do their bit to help and I hope people within our industry will get behind this event to show their support for BLUE and do their bit for the environment.”

The cyclists will be escorted by a large support team, managed by La Fuga – specialists in delivering large-scale cycling events. La Fuga believe that cycling can be used as the perfect platform to engage clients, fundraisers and fans.

The general public is welcome to head to the Tower of London on Sunday 18 September at 7.15am to wave off the riders who will be leaving at 8am sharp. The meeting point is next to Tower Bridge at the East Tower (Tower of London, EC3N 4AB).

To donate to BLUE and find out more about its vital conservation work, please visit: http://www.bluemarinefoundation.com/support-us/