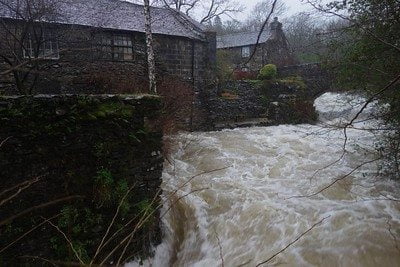 A leaked paper says flood defences are being abandoned or maintained to minimal levels because of government cuts and could leave almost twice as many households at “significant risk” within 20 years. The paper was presented to and discussed by ministers on 30 November last year.

The Guardian reported yesterday that the leaked document states: “We have had the five wettest years since 2000. The Environment Agency’s funding for maintaining flood assets has fallen by 14%. Downward adjustments have also been made to intended revenue spending commitments.”

The leaked paper was written by the body representing all major organisations responsible for flood defences, the Association of Drainage Authorities (ADA), whose members include local authorities, internal drainage boards and the Environment Agency.

The paper goes on: “Failure of assets and networks is more likely as extreme weather events become more frequent and unpredictable. We must change our approach to managing water level management assets and systems … adopting a more long-term approach.”

The document suggests that due to 40% budget cuts Councils have had to reduce or withhold funding to organisations and landowners who managed river levels. “Such reductions in investment mean that some river, watercourse and sea defence systems and structures are maintained only to a minimal level; consequently the useful lives of those assets will be reduced.” The report points out that the Environment Agency has had to reduce maintenance or even stop operating some flood defences in Cumbria and Lancashire.

“The rivers and coasts of some rural areas are at a major crossroads and their funding is purely based on the benefits of flood risk to people and property as calculated currently. The Environment Agency has … reduced the extent of their watercourse channel maintenance and taken steps to stop operating a number of structures and systems. Examples include lowland catchments across Lancashire and Cumbria.”

Flood warnings and updates are available at the Met Office here. Tune into your local BBC Radio station for live updates.