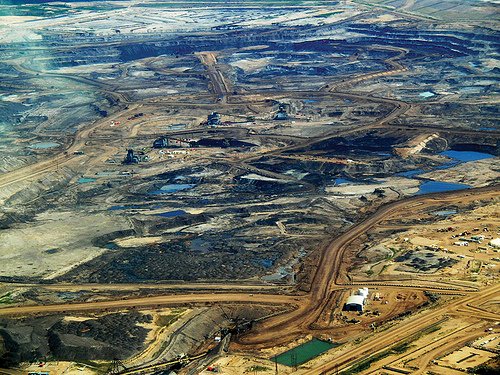 An open letter delivered by a Canadian minister has further highlighted the need for the UK to pull out of the country’s tar sands projects. With the help of a UK campaign group, Alex Blackburne explains why.

The Average Joe probably isn’t aware of tar sands. Certainly, before the Keystone XL pipeline was announced, the vast majority of people would arguably meet the phrase with a shrug of confusion.

An open letter delivered by a Canadian minister has further highlighted the need for the UK to pull out of the country’s tar sands projects. With the help of a UK campaign group, Alex Blackburne explains why.

The Average Joe probably isn’t aware of tar sands. Certainly, before the Keystone XL pipeline was announced, the vast majority of people would arguably meet the phrase with a shrug of confusion.

But as the oil extraction method becomes increasingly talked about, the dangers behind it become abundantly clear.

Tar sands, or oil sands as they’re often called, is the process of turning bitumen into oil by digging it out of the ground through a complicated, highly-carbon intensive and toxic process. Canada is the unopposed world leader in it, boasting the biggest tar sands deposit in the world. And contrary to many people’s thoughts, it’s the biggest supplier of oil to the US.

“[Canada has] transformed a vast area of pristine ancient forest into a post-apocalyptic moonscape of huge craters in the earth that are hundreds of metres deep”, said Jess Worth, co-founder of the campaign group, the UK Tar Sands Network.

“The entire ecosystem has just been completely removed in order to dig down and get this sticky bitumen stuff out of the ground, so it can then go through this highly-toxic, very energy-intensive process of upgrading and refining to get to the point where it’s usable oil, and then the vast majority of it is currently exported to the US”.

But this comes at a cost.

“Compared to conventional oil, tar sands is much more dangerous for the climate, because of the extra energy that is used to extract the oil”, said Worth. “Its emissions are three to five times more carbon intensive per barrel than conventional oil.”

NASA scientist James Hanson said that if all the tar sands were extracted, it’d be “game over for the climate”. Yet progress in the sector doesn’t look like slowing.

“The amount of carbon emissions locked up in the tar sands would tip us over the edge into runaway climate change, without a doubt”, continued Worth.

“As a global community, we cannot afford to continue to extract the tar sands. We have to leave them in the ground and find alternative sources of energy”.

Canada’s incredible natural geography means that it could potentially become a world leader in renewable energy, mirroring the progress made by the likes of Denmark and Germany.

But instead, it chooses to pollute our atmosphere with harmful gases and transform itself into a so-called “petrostate”.

The UK appears to be fully supportive of the projects, singing from exactly the same hymn sheet as Canada. In an era of sustainability-centred revolutions and advancements, this is impossible to fathom.

Canada and the UK’s continued support of the tar sands projects have been met with significant protest from all around the globe.

The UK Tar Sands Network is just one of many campaign groups set up in order to challenge the Canadian Government, which through its minister of natural resources, Joe Oliver, released an open letter on the Financial Post website last week.

In it, Oliver takes swipes at “environmental and other radical groups” who he says are doing all they can to “stop any major project no matter what the cost to Canadian families in lost jobs and economic growth” – a ridiculous statement.

The groups that are opposing to Canada’s projects do so because of the massive environmental consequences of undertaking them. The minister of natural resources is writing as if there are no alternatives to tar sands, which there obviously is, in the form of clean energy.

In response to Oliver’s letter, The Guardian’s Kelly Rigg wrote that, “The letter was so far off the mark, one can only conclude that the government is becoming unhinged over the growing opposition to tar sands development. This should be a cue for Britain to reconsider its unfailing support for Canada on this issue in the European context”.

He told Blue & Green Tomorrow that the UK’s backing of the tar sands projects in Canada is undoing all the good work being done to tackle climate change.

“Whatever the UK Government is doing internally to combat global warming will be outweighed by the carbon that will flow from a fully exploited tar sands complex in Canada”, he said.

“This is the second biggest pool of carbon on Earth; just as Governments work with Brazil to help keep the rainforest intact for planetary reasons, so they should be working with Canada to keep that carbon in the ground.”

But the UK pulling out of such a deal looks unlikely, with David Cameron and the coalition Government acting as Canada’s “henchmen in Europe” according to the UK Tar Sands Network’s Worth.

Colin Baines, campaigns manager at The Co-operative, predicted a bleak future if something isn’t done now to decrease the currently increasing fashionableness of unconventional oil supplies.

“If the alarming global trend of developing high carbon unconventional fossil fuels, such as tar sands, is allowed to continue we run the risk of triggering runaway climate change”, he said.

“The business case for the oil industry’s massive expansion plans for tar sands is based on an International Energy Agency demand scenario which would lead to six degrees of warming and catastrophic climate change – this is grossly irresponsible to put it mildly“.

It’s both baffling and frightening that tar sands are being exploited and even more so why the UK is seemingly behind any plans.

Green campaigners have accused the UK Government – the “greenest Government ever”, remember – of disregard for the environment before. It won’t come as a surprise to many that this seemingly bold claim is starting to appear slightly throwaway.

Have a look at the UK Tar Sands Network’s ‘What can I do?’ page for more information about how you can make a difference.

These oil companies in Canada wouldn’t have the dominance they have without investment, so putting your money in sustainable places can go a long way to stopping more tyrannical behaviour.

Ask your financial adviser or fill in our online form and we’ll connect you with a specialist ethical adviser who will be able to help.