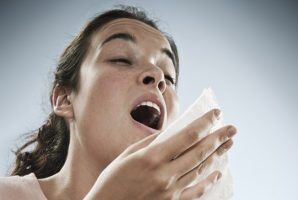 Climate Change Could Cause Hay Fever From Ragweed Pollen To Double

According to a report from the Univeristy of East Anglia, in collaboration with various institutions, new hay fever problems could be caused for millions of people due to climate change.

Research published today reveals that the number of people suffering hay fever from ragweed pollen could double in just 35 years. Researchers believe climate change will be responsible for two thirds of this increase.

Higher ragweed pollen concentrations and a longer ragweed pollen season may also increase the severity of ragweed symptoms, with populations across most of Europe likely to be affected in the next 35 years.

Hay fever is a common allergic condition that is estimated to already affect 40 per cent of Europeans at some point in their life.

Lead researcher Dr Iain Lake from UEA’s School of Environmental Sciences, said: “Pollen allergy is a major public health problem globally but it has not been known what sort of an impact climate change will have.”

This is the first study to quantify what the consequences of climate change on pollen allergy may be.

Ragweed is a highly invasive plant and its pollen is a common allergen. A single plant may produce around a billion grains of pollen per season, which is carried on the wind and its potential to cause allergies is high.

The team created maps of estimated ragweed pollen counts over the pollen season and combined them with data on where people live and levels of allergy in the population.

They found that the number of people affected by Ragweed pollen is likely to more than double in Europe from 33 to 77 million people – by as soon as 2050.

Dr Lake said: “Our research shows that ragweed pollen allergy will become a common health problem across Europe, expanding into areas where it is currently uncommon.

“The problem is likely to increase in countries with an existing ragweed problem, such as in Hungary and the Balkans. But the greatest proportional increases will happen in countries including Germany, Poland and France.

“Higher ragweed pollen concentrations and a longer ragweed pollen season may also increase the severity of symptoms,” he added. “France and the north west of Italy are likely to see airborne ragweed pollen earlier in the season from mid-July to mid-August. Our projections suggest that ragweed pollen will persist from mid-September to mid-October across most of Europe.

“The annual economic burden of allergic disease in the EU is already estimated at between €55 billion and €151 billion so increases on this level will bring a hefty price tag.

“It is also important to add that climate change consequences will not be restricted to ragweed – and a range of other pollen-producing species are likely to be affected. Our methods provide a framework for other studies investigating the impacts of climate change on pollen allergy for other species.”

‘Climate change and future pollen allergy in Europe’ is published in the journal Environmental Health Perspectives on 25 August 2016.