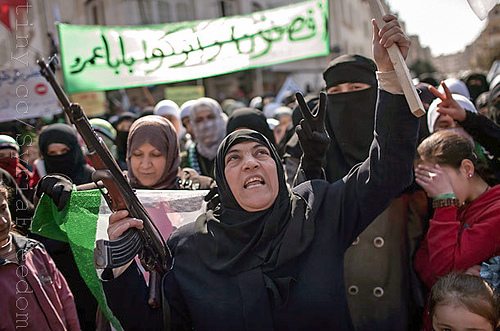 Droughts made more severe by manmade global warming may have been a major driver of the conflict in Syria, scientists have claimed.

Estimates of deaths in the ongoing two-and-a-half year war currently range between 92,520 and 125,835, including a significant proportion of civilians.

But according to research presented at the annual meeting of the American Geophysical Union, resource shortages exacerbated by anthropogenic climate change may have helped trigger the bloodshed.

Scientists studied Syria’s historical rainfall patterns, going back 100 years. They found that in the years leading up to the civil war, the region had an unusually severe three-year drought that could not be explained by natural climate variability.

“We don’t have any observed evidence to support a 100-year trend in precipitation that we would prescribe as being natural”, study co-author Colin Kelley, of the University of California at Santa Barbara, told LiveScience.

“We can only assume that the trend is anthropogenic.”

A 2012 report by the thinktank the Centre for Climate and Security claimed that between 2006 and 2011, up to 60% of Syria’s land experienced one of the worst droughts in recorded history, causing severe crop failures. In some areas almost three-quarters of Syrians lost all of their crops, while herders lost around 85% of their livestock.

“Syria’s current social unrest is, in the most direct sense, a reaction to a brutal and out-of-touch regime”, the report reads.

“However, that’s not the whole story. The past few years have seen a number of significant social, economic, environmental and climatic changes in Syria that have eroded the social contract between citizen and government in the country, have strengthened the case for the opposition movement, and irreparably damaged the legitimacy of the al-Assad regime.”

The authors suggested that displacement from rural areas to urban centres and discontent in agriculture dependent communities played a major role in fuelling the conflict.

William Polk, an ex-US State Department adviser, wrote, “So tens of thousands of frightened, angry, hungry and impoverished former farmers flooded constituted a ‘tinder’ that was ready to catch fire.”

Meanwhile, Kelley added, “We think of it as the straw that broke the camel’s back.”