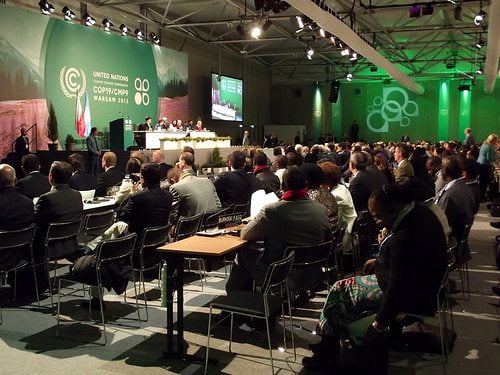 A group of investors collectively worth €7.5 trillion (£6.26 trillion) has described the positive conclusion to the UN climate talks in Warsaw as an important step forward, but has urged EU leaders to back up the promises with firm action.

The crucial two-week negotiations had appeared to be heading towards failure. In an unprecedented move, a number of campaign groups walked out of the proceedings on Friday – which was supposed to be the final day of negotiations – warning that the conference, “which should have been an important step in the just transition to a sustainable future, is on track to deliver virtually nothing.”

However, after 36 hours of non-stop talks, delegates from just under 200 countries reached an agreement in the early hours of Sunday, committing to set out their greenhouse gas emission reduction targets for the period after 2020 by the first quarter of 2015.

Stephanie Pfeifer, chief executive of the Institutional Investors Group on Climate Change (IIGCC), which represents over 85 of Europe’s largest investors, said that for these targets to be reached, public bodies and private investors must work together.

“This means putting policy frameworks in place which are truly long-term, enshrined in legislation and provide meaningful support for investors who want to back low-carbon energy”, she said.

“European leaders have an opportunity to attend the summit from a position of real leadership by putting decisive policy in place which sets the benchmark for international action.”

However, some campaigners are not satisfied by the progress made in Poland. Sven Harmeling, climate change advocacy co-ordinator at aid organisation CARE International, said, “These talks demonstrate that a few key wealthy countries can slow down tangible progress to tackle climate change.

“The failure of these countries to understand and react to the true gravity of the situation facing the world inflicts increasing risks and impacts on vulnerable developing countries and their people.”

Meanwhile, Friends of the Earth’s international climate campaigner Asad Rehman, who attended the summit, added, “With the planet careering towards catastrophic climate change, the international community has done nothing in Warsaw to take its foot off the accelerator.”

Negotiators also managed to reach compromises on a number of other subjects. An agreement was made on a mechanism of “loss and damage.” Through such a system, rich countries, which have historically contributed the most to climate change, would compensate the poorer countries which are set to suffer the most from its effects.

Under the new deal, the Philippines may be able to apply for funds to help recover from the devastation caused by Typhoon Haiyan. Another mechanism was agreed that will reward nations for preserving their forests, backed by $280m from the USA, EU, Norway and UK.