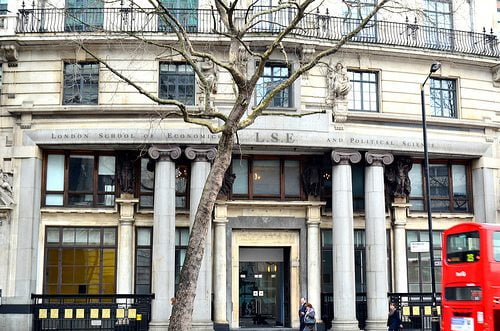 Corporate careers with a conscience: challenge, success, making a difference – can you have it all?

The London School of Economics and Political Science (LSE) has held the above conference for its students for the last few years. Heavy snow prevented me from being a panellist in 2013, so I wasn’t going to miss out this year.

The economist Nick O’Shea was in the chair and on the panel were Kene Umeasiegbu of Tesco plc, Urvi Kelkar of Impactt Ltd, Amanda Feldman of Volans, Robbie Parker of Osmosis Investment Management and yours truly.

It felt like going back 20 years walking into the New Theatre of LSE’s East Building. Academic institutions always have a distinct smell, a not wholly unpleasant mix of industrial cleaning products, linoleum, the idealism of youth and chalk.

They also bring back the memories of academic and relationship triumphs and disasters,  accompanied with the echoes of far too many examinations in stuffy halls on sweltering days in spring (1995, for those who want to know, but are too polite to ask).

I was one of the first to arrive, but the hall soon filled up. Really filled up. I was pleasantly surprised that this number of people were interested in a corporate career with conscience. It gives you hope.

Each panellist gave a short description of what they did and how they came to have a career with conscience.

Kene Umeasiegbu is the head of climate change and sustainable sourcing at Tesco plc. He studied geology at a Nigerian university where oil giant Shell funded a research team. After the various Niger Delta spills, his conscience wouldn’t let him work in the oil and gas industry so he moved over into environmental geology. He started out volunteering with and then working for AIESEC, an international not-for-profit organisation that provides students with leadership training and internship opportunities, before entering the corporate world at Cadbury. His interest in climate change triggered a move to the Carbon Trust and then Tesco in late 2013.

Urvi Kelkar is senior project manager of Impactt Ltd, a consultancy specialising in human rights, labour standards, gender and international development. Before joining Impactt in 2008, she volunteered in Mumbai and, like Umeasiegbu, worked with AIESEC. She has also worked with our friends at Forum for the Future.

Amanda Feldman is director of impact and innovation at Volans, a consultancy founded by John Elkington of SustainAbility fame.  She volunteered with the American Legacy Foundation, a not-for-profit dedicated to preventing teen smoking and encouraging smokers to quit. She joined Volans in 2009, working on social innovation with global businesses, government leaders and entrepreneurs.

Robbie Parker is an analyst at Osmosis Investment Management, having graduated from LSE in 2012. Osmosis is an investment manager focused on finding best-in-class sustainable investment opportunities. The firm played a role in drafting parliament’s resource efficiency agenda.

Running through the many excellent points and amusing anecdotes was the panellists’ desire to make a positive difference. Volunteering was a regular theme for three of the five. Umeasiegbu recommended getting a mentor (his “calmed [his] radicalism”) and similar to this was the need to surround yourself with people of similar values who can support you in your career.

Meanwhile, Feldman stressed the importance of a life outside work and that travel really does open the mind. Her move from activist, where corporates were the “bad guys”, to someone who helps them transform is common.

While working with a variety of corporates, she was asked to sit on a panel with a representative from tobacco giant Philip Morris (despite having protested against the industry in an earlier life). But rather than criticise its practices and products, she was told to imagine the firm using its expertise to deliver vital drugs to those most in need, in an effort to reframe its mission.

To effect change, Umeasiegbu uses a ‘five C’ framework. You need connections who you can influence and use for support, a context (or platform) for leveraging change such as working for Tesco, credibility from your experience and expertise, confidence to deliver your message and capabilities.

It was pointed out in the question and answers session that you need to decide whether you want to make a big difference in a small company or small difference in a big company. Both are valid approaches, but the former means you may miss out on the training and networking opportunities that large corporates can more easily afford.

For my part, I stated that the best advice I had ever been given was “to not be afraid to be fired” or to walk out of a job. I have excelled at the latter, often finding the ethics and decisions of management falling far short of the level I had been taught at business school. This included being told to promote financial products that were inappropriate for customers, firing good people whose face simply didn’t fit, restructuring for the sake of restructuring and working with senior executives with no apparent moral compasses.

Coming late to sustainability while working for a Cambridge-based research house that profiled fast-growth clean technology companies, I saw the existential threat of climate change and the role of investment in addressing that threat. This was the genesis of Blue & Green Tomorrow.

What my troubled existence in the corporate world did teach me, though, were the commercial skills to run a business and the strengths and weaknesses of corporations. Most corporations are blundering about in the dark when it comes to sustainability, with positive change sabotaged by the short-term self-interested fear of shareholders, ill-informed executives and middle managers.

The panel represented a small slice of the people changing those companies from within, helping them from without through consultancy or investment or starting a magazine that highlights the heroes (and occasionally names the villains).

The answer to the question, “Can you have a corporate career with conscience?” is clearly a resounding yes. It is by no means the easiest or most straightforward career path, but it’s certainly the most worthwhile and fulfilling.

Simon Leadbetter is the founder and publisher of blueandgreentomorrow.com.