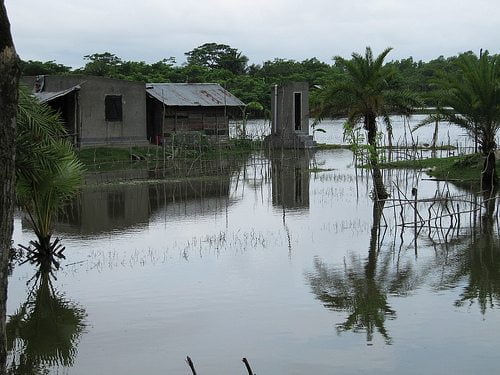 Emergency teams are assessing the damage caused by the cyclone Phailin, which disrupted the Andhra Pradesh and Orissa states with 125mph winds on Saturday.

Indian authorities said they were more prepared this time, compared to when a similar storm killed 10,000 people in 1999, and that they had managed to keep the death toll to a low level.

The cyclone made landfall on Saturday in the eastern part of the country, and headed away on Sunday, leaving wrecked houses and other buildings in its wake. Most of victims died because of by falling trees as many didn’t want to leave their homes or struggled to find shelter.

Relief operations are ongoing, despite the water levels in some areas have risen over nine metres, while forecasters predict further rainfall for Monday.

In June, the Indian Himalayas were hit by a severe flood that killed nearly 6,000 people and affected the economy of the region, often visited by tourists and pilgrims.

A recent study revealed that human-caused global warming played a crucial role in half of the extreme events occurred in 2012.

Meanwhile scientists have warned that rising temperatures linked to manmade climate change would contribute to sea level rise in US coastal cities, as well as extreme weather in Australia. In July, the UN called the period of 2001 to 2010 a decade of “unprecedented extremes”.

UK environment minister Owen Paterson recently claimed that Britain would benefit from climate change because of the warmer weather, though the president of the National Farmers’ Union said that it represented the biggest threat to agriculture.