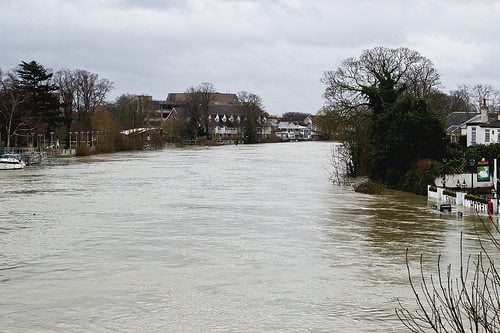 The prime minister has said the Environment Agency will not lose 500 members of staff amid its efforts to deal with Britain’s flooding. However, he has not said whether the job cuts will go ahead once the situation has been dealt with.

David Cameron told BBC Breakfast, “Those have never been announced plans. These aren’t plans that are going to put in place.

“Of course every organisation has to make sure it is efficient but nothing will be done at the Environment Agency that will hamper our flood relief effort and the chief executive has made that very clear.”

It has previously been suggested that budget cuts would mean job losses for 557 people working on flooding. The revelations was heavily criticised by campaign groups, which warned the move would create more problems and was “shortsighted”.

In response to the news, Guy Shrubsole, climate campaigner at Friends of the Earth, said, “This mustn’t just be a stay of execution – sacking hundreds of agency staff that work on flooding would put thousands of households at risk.

“David Cameron must urgently fix the gaping £500m hole in UK defences too, if we’re to hold back the increase in flooding the experts anticipate. It’s not enough for the prime minister to recognise the serious threat climate change poses – he must take bold action.”

The flooding crisis is expected to continue in many parts of the country with further wind and rain anticipated today. The Environment Agency currently has 17 flood warnings in place. The south-west has been amongst the worst hit and in January the Thames water flow was at the highest level since 1883.

In a statement, the Met Office said evidence suggests that the “exceptional” weather the UK has been experiencing for over a month was linked to climate change. Cameron has previously made a similar comment.

UK weather: 80,000 homes without power after 112mph winds in Wednesday