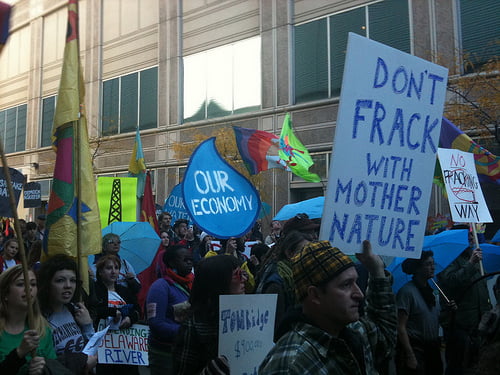 The fracking industry has received an unwelcome boost after publication of a report that includes measures to control its negative impact.

The independent study, conducted on behalf of the Department of Energy and Climate Change (DECC), acknowledges that the controversial activity caused two minor earthquakes in Blackpool last year, but highlights a handful of ways to “mitigate the risk” of future tremors.

These include adding a “smaller pre-injection and monitoring stage” to the process, and a “traffic light” system, whereby a red light is given to “activity levels of magnitude of 0.5 or above” – meaning “fracking should be stopped and remedial action taken”.

Interesting to note the use of the term injection given Al Gore’s rather grim yet poetic analogy at a TED Talk back in 2008: “Junkies find veins in their toes when the ones in their arms and their legs collapse. Developing tar sands and coal shale is the equivalent.”

Cuadrilla Resources, a UK-based energy company, admitted in November that it was “highly probable” that its activities had caused the earthquakes, which measured 2.3 and 1.5 on the Richter scale—an admission that led to protests at one of its gas exploration sites in Merseyside last year.

Fracking, or hydraulic fracturing, is the action of inserting a solution into shale rock, which causes them to fracture (hence, fracking) and produce energy in the form of gas.

Aside from the fact that it causes earthquakes, it’s claimed that the procedure also contaminates drinking water. And if it doesn’t do this, it certainly consumes a vast amount of the stuff, which at a time of drought in the UK, can’t be a good thing.

DECC’s chief scientific advisor, David MacKay, said, “If shale gas is to be part of the UK’s energy mix we need to have a good understanding of its potential environmental impacts and what can be done to mitigate those impacts.

“This comprehensive independent expert review of Cuadrilla’s evidence suggests a set of robust measures to make sure future seismic risks are minimised – not just at this location but at any other potential sites across the UK.”

BBC Radio 4’s Today programme invited one of the report’s authors, Brian Baptie, onto its show yesterday to talk about the issue. He said there was “no evidence of structural damage” from the earthquakes in question, and was firmly in the pro-fracking camp, as long as it was closely monitored.

However, Hannah Kitchen, campaigner at Friends of the Earth Scotland, said, “Earth tremors are only one of the problems associated with fracking and there are many more potentially negative impacts on the environment and public health.

“Fracking is very energy and water intensive, it involves large amounts of toxic chemicals and there is a significant risk of methane leakage from the bore, which can pollute groundwater sources or escape into the atmosphere as a potent greenhouse gas.

“These risks would multiply in any commercial project because of the large number of wells required in one area.”

Kitchen isn’t the only campaigner to have voiced their worry about the extension of the industry.

Elsie Walker, an activist at Frack Off, an anti-fracking campaign group, called the DECC report a “dangerous distraction”.

She added, “People need to understand that the wave of unconventional gas development that is threatening the British Isles will bring with it far greater consequences than a number of small earthquakes.”

Indeed, the UK’s reliance on gas as a source of energy is a topic that has baffled many. In his budget statement last month, George Osborne highlighted the Government’s strong ties with gas, saying that it is “cheap, has much less carbon than coal and will be the largest single source of our electricity in the coming years”.

A gas leak at a North Sea platform less than a week after Osborne proclaimed this bond with fossil fuels should have given the chancellor pause for thought.

Osborne’s commitment to gas, buttressed by the Government’s apparent intent to continue fracking, means the role of renewable energy in our economy is once again cast into doubt.

“Before the Government pins its hopes on shale gas, it should look at all the potential implications, not just whether it can be extracted without causing mini earth tremors”, said Renewable Energy Association chief executive, Gaynor Hartnell.

“There is no justification for this to undermine the case for renewables.

“Globally, renewables are being deployed at a faster rate than any other energy technologies, and for good reason.

“The UK needs to get firmly on the path to a renewable future and not be left behind.

“Whilst Nick Clegg sends a strong message on this, the overall impression is that the Government risks getting distracted by other potential options such as nuclear, carbon capture and storage and now shale gas.”

The news that fracking has been given the green light is another blow for what should be a thriving renewables sector.

Our recent in-depth report, The Rise of Renewable Energy, explores the past, present and future of the clean power industry, and singles out renewables as a beautifully-formed, natural solution that should underpin our economy.

A study last year by Cornell University found that the natural gas produced by fracking could actually be “dirtier” than coal. At a time when the UK is trying to decrease its carbon emissions, should we really be placing a greater emphasis on an industry that, in essence, we are fighting against?

Also speaking on BBC Radio 4’s Today programme, Tony Juniper, former director of Friends of the Earth, said the impact of fracking was “comparable to coal, and in some estimations, actually worse”.

Given this, renewable energy once again emerges as the only viable alternative energy option. And because of its positive impact on the environment, it’s imperative that the Government realises the opportunities offered by clean power.

Good Energy – the UK’s only 100% renewable electricity supplier – is on hand to provide individuals with straightforward steps to switch their home to renewable power.