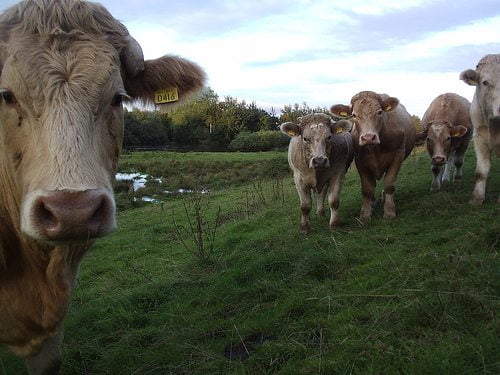 Avoiding the most devastating impacts of climate change may be impossible unless global consumption of meat and dairy products is drastically cut, a new study has warned.

Its publication coincides with the release of the Intergovernmental Panel on Climate Change’s (IPCC) sobering new report – a stark warning that no nation will be untouched by the impacts of climate change and of what may happen if global warming exceeds 2C.

The research, from Chalmers University of Technology in Sweden, suggests that staying below such a threshold will require a reduction of consumption of meat and dairy products to limit greenhouse gas emissions from agriculture.

It explains that while the transportation and energy sectors account for the largest share of emissions, eliminating this pollution alone may not be enough.

The digestive systems of ruminants – animals that ferment food in a specialised stomach prior to digesting it, such as sheep and cattle – are the biggest human-related source of methane emissions.

Methane from livestock alone adds up to around 7.1 gigatonnes per year, or 14.5% of all human-caused greenhouse gas emissions, according to the UN Food and Agriculture Organisation.

Scientists have estimated that methane is responsible for 20% of the enhanced greenhouse effect.

The study warns that these emissions, along with nitrous oxide emissions from fields, are set to rise further as populations rise and diets change. It forecasts that they could even double by 2070.

It also notes that by 2050, estimates indicate that beef and lamb will account for half of all agricultural greenhouse gas emissions, while contributing just 3% of human calorie intake.

“We have shown that reducing meat and dairy consumption is key to bringing agricultural climate pollution down to safe levels”, said Fredrik Hedenus, one of the study’s authors.

“Broad dietary change can take a long time. We should already be thinking about how we can make our food more climate friendly.”

The study concedes that there are ways that agriculture can be made more efficient, but says that these are difficult and expensive.

“These emissions can be reduced with efficiency gains in meat and dairy production, as well as with the aid of new technology”, said co-author Stefan Wirsenius.

“But the potential reductions from these measures are fairly limited and will probably not suffice to keep us within the climate limit, if meat and dairy consumption continue to grow.”

This is not the first time that scientists and leading climate change experts have suggested that encouraging the uptake of vegetarian diets could provide a boost to the battle against climate change.

In December, researchers suggested that one of the most effective ways to limit climate change would be to tax meat in order to reduce populations of ruminant livestock.

He said, “People change their notion of what is responsible. They will increasingly ask about the carbon content of their food.”