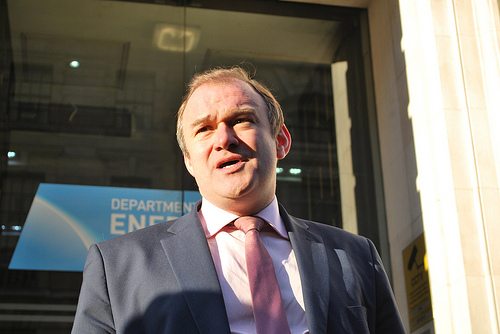 The government has outlined an action plan to ensure a global climate agreement to reduce greenhouse gas emissions ahead of UN conference in Paris in 2015 and climate summit in New York later this month.

[Blue&Green Tomorrow is currently running a crowdfunder to ensure its survivial. Please pledge.]

It also stressed the importance of investing in low carbon solutions, such as energy efficiency and renewables, to keep emissions down and help businesses to save money.

Energy secretary Ed Davey said, “We are already experiencing the impacts of climate change within the UK. Extreme weather events at home and abroad already cause significant costs and disruption to UK businesses, and we are predicted to experience increasingly frequent and severe flooding and are vulnerable to predicted rise in heat waves, storms and gales, as well as rising sea levels which will cause increased encroachment on our coastal areas.”

He added global coordinated action is needed to reach a global agreement in 2015 and that the UK is willing to cooperate with businesses and environmental groups.

“The UK is at the forefront of helping to shape and deliver this agreement. Paris will not be the end of the road in terms of tackling climate change, but an ambitious agreement would be a huge step forward which we can then build on in the future,” Davey said.

The UN climate summit in New York will be held on September 23 and will look at moving the discussion on how to reduce greenhouse gas emissions in order to keep global warming under a 2C threshold, while the final climate agreement will be signed in Paris in 2015. David Cameron is expected to participate to the summit in New York.

On Monday, a group of NGOs called on the government to put the UK at the forefront of the race to a low-carbon future.

Katja Hall, deputy director-general of business organisation CBI, commented on the report, “Tackling climate change and driving growth can go hand in hand, and getting a global deal next year will be crucial to giving businesses certainty, enabling them to compete on an equal footing and spurring innovation.

“This report is an important line in the sand from the government, and it is absolutely critical that it continues to work with international partners to keep the momentum going all the way to Paris.”

Photo: Department of Energy and Climate Change via flickr