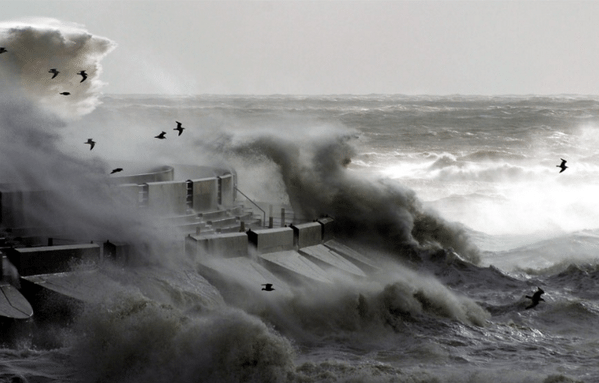 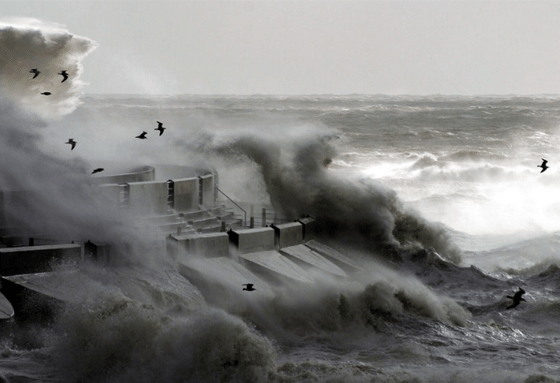 One person has died and thousands of homes across Scotland are without power as winds of more than 100mph hit the UK. Flooding is expected later on Thursday, when the most serious tidal surge for 30 years batters the east coast.

The Environment Agency and Met Office have warned that gale-force winds, powerful waves and a tidal surge caused by low pressure will combine with high tides from Thursday through to Saturday morning.

A lorry driver was killed and four other people were injured in West Lothian, Scotland, after a HGV was overturned by winds at around 8am.

Scottish Hydro Electric said up to 80,000 homes were without power in the north of Scotland, while trains and flights have been disrupted across Scotland and the north of England. The winds will make their way south later in the day.

The Environment Agency has issued 23 severe flood warnings – meaning there is a danger to life – across the country, while police in Norfolk, Suffolk and Essex are on alert.

The agency warned 3,000 properties are likely to be flooded on Thursday, while in some places sea levels may reach as high as those that caused the devastating North Sea flood of 1953. In England, 307 people died as a result of the disaster, although the authorities have acted to reassure citizens that 21st century flood defences are far more effective.

However, Paul Leinster, Environment Agency chief executive, warned, “Flooding of some coastal communities is expected and some defences could be overtopped by the combined effect of high tides, high winds and a tidal surge.

“Coastal paths and promenades will be highly dangerous as there is an increased risk of people being swept out to sea.”