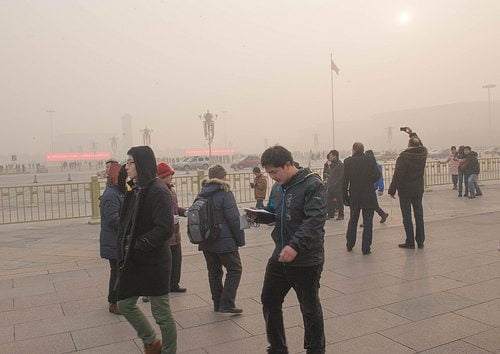 China’s former health minister Chen Zhu has estimated that up to 500,000 premature deaths are caused each year by air pollution – now the fourth biggest killer in Beijing.

Chen’s estimates are the latest to break the traditional silence among government officials over the issue, with authorities submitting to pressure from global efforts to tackle air pollution.

His comments came in an article he co-authored with three other leaders in the Chinese health industry for the medical journal The Lancet. The authors said between 350,000 and 500,000 premature deaths were caused by air pollution every year in China.

An expansion in Beijing’s industrial capacity is thought to be a contributing factor, with coal pollution, dust and particles of concrete being some of the biggest issues.

In November last year, air pollution was blamed when an unnamed eight-year old girl from the eastern province of Jiangsu was diagnosed with lung cancer.

“Nowhere is safe in this country anymore. There are no words, only tears”, one user of Sina Weibo – China’s equivalent of Twitter – wrote at the time.

Chen said that despite Chinese authorities pledging some $550 billion (£335 billion) over the next five years to fight air pollution – Beijing alone has reportedly committed $277.5 billion (£168.5 billion) – the country will face particular challenges.

He said, “Prevention and control is difficult because there are multiple pollution sources and pollutants across cities and regions.”

Earlier this week, it was announced that China would be embarking on a large-scale transition to more sustainable and cleaner energy sources, with two wind turbines being erected in the Xinjiang province every day.