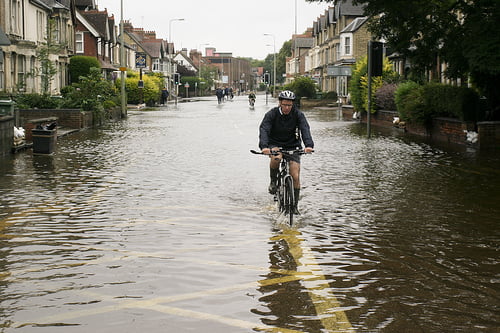 Preliminary analysis by the Met Office shows increasing frequency of extreme rainfall – the kind of deluge you expect once every hundred days. With the frequency increasing since 1960, the cause is global warming and the atmosphere’s ability to hold more moisture.

2012 was a year of weather extremes in the UK, from snow to drought to flood. The Met office announced today that last year was the second wettest since records began over 100 years ago – the wettest being 2000. Extreme rain fell once every 70 days in 2012. China, India, Pakistan and Australia have all seen increasing extreme rainfall over the last few years, so the phenomenon is a global one.

As we wrote in December, “the UK benefits from the Gulf Stream and North Atlantic Drift (a powerful, warm, and swift Atlantic ocean current), which means we have historically enjoyed warmer winters than countries on similar longitudes. The behaviour of the Gulf Stream is becoming more erratic and this means our relatively benign weather will become more volatile. “

This geographic position makes us vulnerable to erratic weather patterns based on climate change.

Chief scientist at the Met Office, Professor Julia Slingo, said further research was needed but the findings were potentially significant.

“We have always seen a great deal of variability in UK extreme rainfall because our weather patterns are constantly changing, but this analysis suggests we are seeing a shift in our rainfall behaviour,” she said.

“There’s evidence to say we are getting slightly more rain in total, but more importantly it may be falling in more intense bursts – which can increase the risk of flooding.

“It’s essential we look at how this may impact our rainfall patterns going forward over the next decade and beyond, so we can advise on the frequency of extreme weather in the future and the potential for more surface and river flooding.

“This will help inform decision-making about the need for future resilience both here in the UK and globally.”

While climate science has many difficult to comprehend models and theoretical frameworks, we are just beginning to see the early symptoms of real climate change on our country through extreme weather events such as floods and droughts.

It is very likely that lives, property and money will be wrecked or lost as conditions become more erratic.

The study into extreme rain was based on statistics from the National Climate Information Centre, the UK’s official climate record.