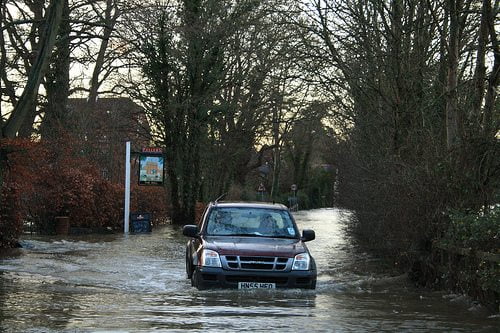 The Met Office has issued further weather warnings, anticipating more heavy rain and wind on Monday, as residents and authorities across the south of England continue their efforts to clean up after the storm that hit over Christmas.

Some have been left without power for five days, and were offered “Christmas meals” by UK Power Network, which operates the grid in the area.

UK Power Network also announced on Saturday that it would be tripling compensation payouts for some customers left without power.

The statement said that in some areas, rainfall accumulations of 20-30mm were expected, with 50-60mm on high ground. Although this represents a relatively small amount of rainfall, some say that this will be aggravated by already saturated ground. The worst is expected to arrive on Monday.

Residents across some parts of the south reacted angrily as the prime minister visited Yalding in Kent, saying that they were given very little warning of the storm that battered the region over the festive period. Cameron was also accused as using the visit as a publicity stunt.

One resident told the Guardian, “The people he is talking to, the Environment Agency and so on, they weren’t here. I swam this road on Christmas Day, pulling people out on my own. There was no one here on Christmas Day or Boxing Day. A lot of families have lost a lot.”