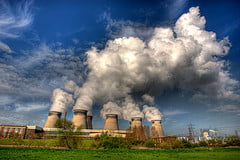 At a time when a shift away from fossil fuels is widely accepted as necessary, new analysis from Friends of the Earth shows that the number of gas-fired power stations in the UK is set to double, with gas prices driven up in accordance.

Energy firms, including the so-called ‘big six’ – British Gas, EDF Energy, SSE, Southern Electric, E.ON and Npower – are on track to build nine gigawatts (GW) worth of power plants by 2016, a figure that dwarves the Government’s 2020 target of 4.9GW.

At a time when the need to shift away from fossil fuels is widely accepted, new analysis from Friends of the Earth shows that the number of gas-fired power stations in the UK is set to double, with gas prices driven up in accordance.

Energy firms, including the so-called ‘big six’ – British Gas, EDF Energy, SSE, Southern Electric, E.ON and Npower – are on track to build nine gigawatts (GW) worth of power plants by 2016, a figure that dwarves the Government’s 2020 target of 4.9GW.

The data appears in Friends of the Earth’s analysis titled Enough is Enough: new gas-fired power station capacity in the UK, and in an accompanying report called Gas prices: is the only way up?.

A total of 16.2GW of projects have been accepted by the Government – 60% of which are owned by one of the ‘big six’ suppliers. And although not all of the planned stations are expected to go ahead, the figures threaten to undermine the UK’s push towards a low-carbon economy.

Friends of the Earth’s energy campaigner, Paul Steedman, said, “Once again we’re seeing how the ‘big six’ and other energy companies are planning to keep us hooked on dirty and expensive gas we don’t need.

“Gas dependency is a costly, polluting dead-end – to guarantee affordable energy in the long run we must switch to clean British power and slash energy waste.”

Bill prices are likely to increase because of rising gas costs, too. But as Blue & Green Tomorrow reported in December, this wouldn’t happen if we had an increased reliance on renewables.

To make matters worse, Friends of the Earth predict that the UK may lock itself into an inefficient energy system – much like the one predicted by the International Energy Agency in November – if the vast majority of the gas-fired power plants currently planned actually go ahead. And this would make the carbon reduction targets almost impossible to meet.

But it’s not all doom and gloom. There is a revolt happening beneath the high street energy suppliers’ feet.

A YouGov survey carried out for Friends of the Earth and Compass in February found that 86% of people support an independent public inquiry into the ‘big six’ energy companies.

The support for renewably-sourced clean power was also robust, with 70% of people wanting the Government to force the sextet of dirty energy providers to invest more in clean energy generated from the UK’s vast array of wind, sun, wave and tide resources.

“People in the UK are fed up of the energy rip-off”, Steedman claimed.

“An overwhelming majority want the Government to force the big energy firms to invest in power from our wind, waves and sun.

“To ensure we have energy we can all afford, Ministers must support clean home-grown power and get tough on dirty energy – that means introducing a ban on new gas plants, unless there is a strong Emissions Performance Standard to limit carbon pollution from power stations.”

It’s one thing filling in a survey stating your discontentment with the ‘big six’, but in reality, one of the boldest actions you could make is to switch to a supplier like Good Energy – the UK’s only 100% renewable electricity provider.

Not only will your home become wholly powered by clean energy, you’ll also be connected to a supplier that topped the Which? customer satisfaction survey back in January.

Renewable energy and good service: the perfect match. What are you waiting for?

Renewables not to blame for UK energy bill hike