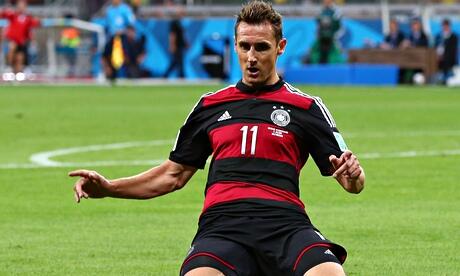 The time has come. Germany vs. Argentina. The 2014 World Cup final. Will Germany’s golden generation end years of hurt, or will Lionel Messi finally shine on the biggest stage?

Die Mannschaft go into the match as favourites after dismantling Brazil on the way to the final, but La Albiceleste are likely to put up more of a fight.

At Blue & Green Tomorrow, we’ve been containing our excitement by calculating who would win in the – perhaps only slightly – more important sustainability cup.

Measuring the two sides against each other in terms of equality, freedom and their contributions to climate change, we ask which nation is the most sustainable.

Yesterday, hosts Brazil fell foul of a 6-2 drubbing at the hands of the Netherlands. The Dutch took a commanding lead thanks to better scores across a range of social indicators, Brazil getting on the scoresheet only because of their superior renewable energy production and lower per capita carbon emissions.

Then we come to the Gini index – a measure of the income distribution of a nation’s residents, with 0% meaning total equality and 100% meaning total inequality. Germany’s 26% (as of 2006) beats Argentina’s 45.8% (as of 2009) and the ruthless Germans are two up.

And it’s three! The Index of Economic Freedom, which measures liberties such as property rights and investment freedom, gives Germany a score of 73.4, ranking them 18th in the world. Argentina sits in 116th, with a score of 44.6, and they look to be down and out in this match too.

The Freedom in the World Index looks instead at political liberties, giving a score between 1 (the best) and 7 (the worst). Argentina concede again with a score of 2.0 to the Netherlands’ 1.0.

The Good Country Index, meanwhile, calculates how much each country contributes to or takes from humanity. It considers things like art, science, peace and carbon emissions. Germany sits at 13th in the world, but Argentina is 57th. Miroslav Klose has better keep an eye on his World Cup scoring record, because it’s five – nil to Germany.

Where is Martin Demichelis when you need him?

After their half-time oranges, Argentina needs a goal to have any chance. But it’s another for Germany. The World Press Freedom Index, gives Argentina a score of 25.27, and Germany a superior 10.23.

Then, Argentina comes so, so close to an equaliser. We come to environmental sustainability. Last year, Argentina met 24.8% of domestic energy supply with renewables. But Germany generated 25.3%. Argentina hit the bar, Germany score, and it’s seven – nil.

Argentina then bag a consolation thanks to their lower carbon emissions. As of 2011, the South American country emitted 4.6 metric tonnes of carbon per capita to Germany’s 9.2. But the final whistle blows.