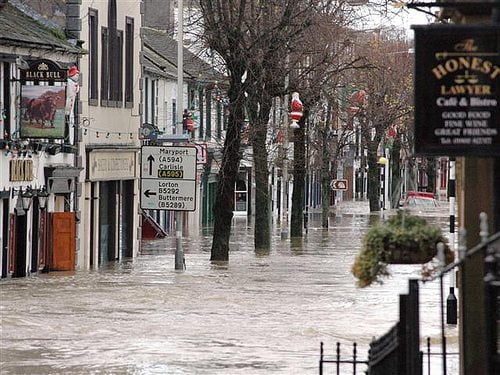 Almost half a million homes at significant risk of flooding will not be covered by the government’s new insurance scheme, as officials have not accounted for the future impacts of climate change.

As some coastal regions try to return to normality after the strongest tidal surge for 60 years caused severe flooding and forced thousands to abandon their homes, it has emerged that the government’s insurance deal, Flood Re, may protect only half of all the homes at risk from future flooding.

The government’s own Climate Change Risk Assessment states that “floods and coastal erosion are already serious risks in the UK, and they are projected to increase as a result of climate change.”

When factoring in the effects of climate change, the Department for Environment, Food and Rural Affairs’ (Defra) report calculates that during the 2020s, between 475,000 and 825,000 homes in England and Wales will be at significant risk of flooding – though these figures do not consider population growth.

However, environmental charity Friends of the Earth has warned that Defra’s assessments for Flood Re fails to take these projections into account because of the uncertainty over the figures.

Instead, it is reported that the likely figure of properties eligible for the insurance scheme will be capped at 500,000. The campaigners say that is simply down to a lack of understanding of systemic risk.

“Following the devastating damage caused by the biggest storm surge across the east coast in the past 60 years, it’s unforgivable that the government’s future flood insurance plan excludes consideration of climate change,” says Guy Shrubsole, Friends of the Earth climate and energy campaigner.

“Its own figures show that global warming will put tens of thousands more British homes at risk of flooding in future.

“The environment secretary must stop playing Russian roulette with people’s homes and livelihoods through his cavalier approach to flood risk.”

A committee of MPs is currently debating the government’s Water Bill, which includes Flood Re. The deal is designed to ensure that flood insurance is affordable for homeowners at high flood risk, but many details are yet to be decided.

In January, research by the London School of Economics also suggested that around 800,000 homes in England and Wales could be affected by flooding in the next 10 years.

An Environment Agency report, published in November, found that flooding cost the UK £600m in 2012, with 70,000 properties affected.