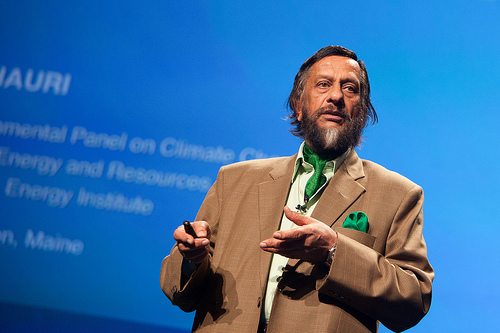 Rajendra Pachauri, chair of the Intergovernmental Panel on Climate Change (IPCC), has called for governments to take climate change seriously and step up to their responsibilities in combating carbon emissions.

In an interview with Responding to Climate Change (RTCC), Pachauri said that delegates at UN Climate Change Conference must “see the scientific reality of inaction and what this will lead to in terms of impacts and the kinds of threats it is going to pose”.

Recently leaked drafts of an IPCC report suggest that scientists have very strong evidence to show that human activity is the main catalyst for global warming.

The full report is due to be published this month, but it is anticipated that it will address certain themes, such as the impact of inaction and that there is a 95% certainty that humans are responsible for changes to our environment.

Pachauri called for governments to act, warning of catastrophic consequences if they fail to do so, but added that public awareness is mandatory in order to encourage political will to act.

He added, “[…]the public is going to demand action, that is the importance of creating awareness.”

There are varying theories that attempt to explain a slowdown in global warming over the last decade. Last month, scientists suggested that this was due to the cooling of tropical waters, but they expect this will regain momentum once temperatures have returned to normal.

97% of scientists agree that climate change is human caused