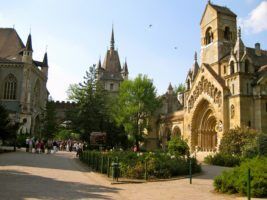 Green Cities Essential For Quality Of Life For The Next Generation

The future development and health of our children relies on access to quality green space and horticultural landscapes.

This was a clear conclusion from the International Association of Horticultural Producers (AIPH) International Green City Conference, supported by Expo 2016 Antalya, in Antalya, Turkey on 27 September.

Over 200 international delegates from 33 different countries as well as representatives from cities across Turkey heard how green cities can become a reality and how this will benefit the lives of citizens now and in the future.

Prof. Agnes van den Berg from the Netherlands and Richard Louv from the USA, spoke on the dangers of ‘Nature Deficit Disorder’. As cities grow and the fear of crime increases parents try to protect their children by preventing them from exploring the natural world alone. As a result, we are creating a generation that is more and more detached from its environment. Children have lost the ability to roam and research has shown the impact this has on the development of children. Research presented by Prof. van den Berg showed that giving children more access to nature improves their motor skills for example.

We want all cities, all over the world, to be green and together we will achieve more.

Further key talks included: the importance of city greening in Antalya, greening in challenging situations including a vertical wall in Singapore containing 30,000 plants, improving the living environment for two million citizens in the hostile environment of Qatar and developing micro-climates, providing all citizens with a park within ten minutes-walk of their homes in Chinese city of Yangzhou and the ‘Communities In Bloom’ initiative greening towns across Canada and the world, including in Antalya which won a top award in the 2015 Communities in Bloom contest.

Chairman of the AIPH Green City Committee and speaker at the conference, Karen Tambayong, commented following the conference saying:

“We want all cities, all over the world, to be green and together we will achieve more.”

“It is our hope that all those present will take what they have heard and use it to transform the cities they come from and therefore the lives of the citizens.”

Read more on the topics discussed at the conference at: www.aiph.org/green-city-conference