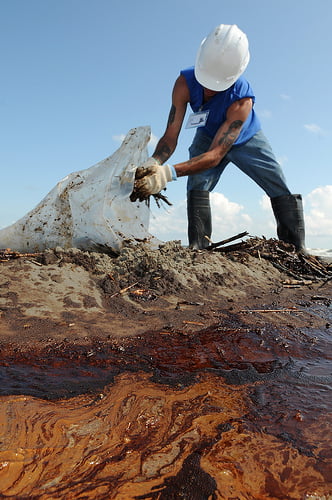 Maintaining safety at the Deepwater Horizon rig was a shared effort, a senior BP executive said during yesterday’s court case relating to the Gulf of Mexico oil spill in 2010.

The extent to which BP was negligent came under sharp scrutiny on the third day of the civil trail, which could result in an £11.6 billion fine for the energy firm.

The Deepwater Horizon disaster was responsible for killing 11 workers and spilling millions of barrels of oil into the Gulf of Mexico – for which BP was fined £2.8 billion in criminal charges.

Robert Cunningham, a solicitor for the accusers, persistently pressed Lamar McKay, BP’s US president at the time of the spill, to admit that BP bore ultimate responsibility for the blowout. McKay insisted that management of hazards was a “team effort” and that all involved in the Deepwater Horizon disaster should take a share of the blame.

While BP was extracting the oil from underneath the Gulf of Mexico during the explosion of the Macondo well, the Deepwater Horizon rig itself was owned by Transocean. Meanwhile, cement used to seal the well was provided by Halliburton.

“I think that’s a shared responsibility, to manage the safety and the risk”, said McKay.

“Sometimes contractors manage that risk. Sometimes we do. Most of the time it’s a team effort.”

Mike Underhill, the Department of Justice’s lead prosecutor said, “Despite BP’s attempt to shift the blame to other parties, by far the primary fault for this disaster belongs to BP.

Underhill added, “Reckless actions were tolerated by BP, sometimes encouraged by BP; these damages were caused by actions that cannot be seen as anything but inexcusable behaviour.”

The trail will go on to determine the causes of the spill in order to assign responsibility to the parties involved; with BP, Transocean, Cameron and Halliburton all at risk of fines.