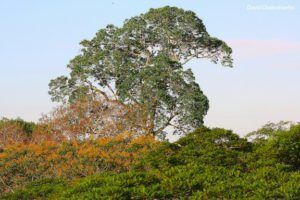 To compete in the 2016 Olympic Games, good nutrition is a crucial part of training, as any of the 10,000 plus athletes who have descended on Rio this summer will tell you. Maintaining a healthy balanced diet is critical to delivering peak athletic performance, along with practice, discipline and determination.

A healthy diet contains whole, minimally processed foods, some of which are native to the Amazon rainforest. In Brazil, we are working with farm and forest communities, supporting them to achieve Rainforest Alliance certification for their operations, which produce, amongst other food items, bananas and Brazil nuts.

Brazil nuts are an incredibly nutrient-rich food that could be a great addition to an athlete’s diet. A 100-gram serving has just 12 grams of carbohydrates, 8 grams of fibre, 14 grams of protein, 94 percent of the daily recommended intake of magnesium, 13 percent for iron, and 16 percent for calcium.

The Brazil nut tree is predominantly found in the Amazon rainforest of Brazil, Bolivia, Colombia, Venezuela, Ecuador, and Peru. It’s often found within a group of 50 or more similar trees (groupings like this are called stands).

Brazil nuts are one of the most valuable non-timber products for communities in the Amazon. However, these trees are easily impacted by nearby deforestation and only seem to produce fruit in healthy, undisturbed forests.

These nuts are one of a relatively small number of globally traded commodities that are helping to save threatened forests. Harvested from fallen fruits, Brazil nut extraction involves little more than collecting the pods known as ‘cocos’ from the forest floor. This practice has been found to increase the abundance of Brazil nut trees across the landscape.

These arboreal wonders can reach heights of almost 50 metres, and in one year a Brazil nut tree can produce some 250 pounds of nuts. Unlike other well-known nuts like almonds or cashews, Brazil nut cannot be grown in plantations; harvesting can only be sustained in closed canopy Amazonian rainforest.

One regular- or average-sized banana contains 25 percent of the daily recommended intake of vitamin B6 (which helps the body create neurotransmitters), 14 percent of manganese (which plays a role in carbohydrate metabolism), and 12 percent of potassium (an electrolyte which helps maintain a healthy heart-rate and normal rhythm). Bananas also contain the minerals copper, which the human body does not naturally produce very much of, and biotin, which is vital for maintaining blood sugar balance and a healthy metabolism. In other words, athletes can only benefit from regularly eating bananas.

Today, bananas cultivated on Rainforest Alliance Certified™ farms are sold in 62 countries, and represent 5.6 percent of the world’s banana supply. Grown in every humid, tropical region on Earth, bananas are the world’s fourth-biggest crop in terms of production value, and more than ten billion bananas are exported from producer countries annually.

A lack of biodiversity can make banana plants susceptible to disease, which in the past, farm managers often attempted to control with toxic pesticides that would then leak into drinking water, pollute irrigation canals, and endanger the health of workers, their families, and communities. That’s why in 1991 the Rainforest Alliance, along with local non-profit organisations, scientists, and farmers established the first standards for responsible banana production.

Contrary to popular belief, banana plants are not trees but giant herbs, which reach their full height of between 10 and 20 feet after only a year. Ten or more bananas growing together on these plants form a ‘hand;’ banana stems have on average 150 ‘fingers’ and weigh nearly 45 kg. Banana leaves are used worldwide in many unexpected ways: as cooking materials, plates, umbrellas, seat pads for benches, fishing lines, clothing fabric, and soles for inexpensive shoes.

Bananas are indigenous to the tropical portions of India, Southeast Asia, and northern Australia, and were brought to South America by the Portuguese in the early 16th century. Today, banana plants grow in the humid, tropical regions of Central and South America, Africa, and Southeast Asia where there are high temperatures and rainfall levels.