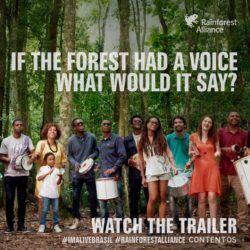 There has been much talk of the impact that the Rio 2016 Olympics may have on the environment. The need to protect Brazil’s rich biodiversity is not new news. For countless years, decades and centuries humans have been inspired by it’s lush flora and fauna.

Renowned musical artists Caetano Veloso, Lenine, Criolo, Emicida, and Pretinho da Serrinha, along with many other celebrated Brazilian musicians, came together in Rio de Janeiro’s Floresta da Tijuca to create a music film and original composition to draw attention to the rainforests of their native Brazil and inspire people to take action to protect them. ‘I’m Alive: The Floresta da Tijuca Sessions’ was conceived of and led by GRAMMY® Award-winning producer Andres Levin of Content-OS, who directed and produced the film alongside Paula Lavigne and Fernando Young.  The project supports the Rainforest Alliance, which works in partnership with Brazilian NGO  Imaflora, as well as farmers, forest communities, and cattle ranchers, to protect Brazil’s magnificent and ecologically fragile natural heritage.