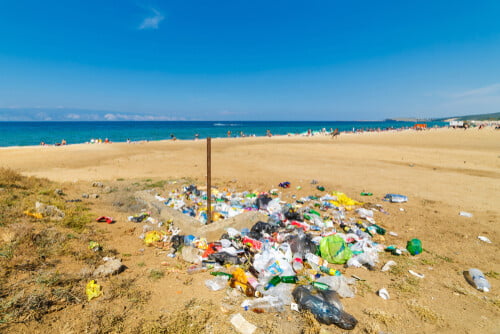 How Bottled Water Harms The Environment (And How You Can Help)

Whether you’re working in an office building or walking in a public park, bottled water is always a common sight. In the past few years, bottled water has become one of the most popular beverages in the United States, making billions of dollars for bottled water companies – but bottled water harms the environment.

But what is it exactly that makes these plastic bottles so bad for the environment? Well, here are a few general ways bottled water negatively affects the environment, and tips on how you can prevent this problem.

It can take up to 1000 years for a single plastic bottle to decompose.

However, this doesn’t mean that the plastic bottle will be gone from the Earth after 1000 years. In fact, although plastic may seem to disappear when it degrades, it is actually still on Earth in microscopic pieces; it just isn’t visible to the naked eye.

This happens because plastic is synthetic and can’t be digested by most living decomposers (like bacteria and insects). What this means is that plastic bottles are not biodegradable, and therefore cannot be naturally recycled back into organic material.

Instead, when plastic starts to degrade (also known as decompose), it only breaks down into smaller and smaller pieces, while leaching toxic chemicals in the process. Factors such as the sun’s light, the wind, and other environmental factors all contribute to the breaking down of plastic, but it will never get broken down completely.

Another big problem with bottled water is that the production of plastic bottles requires fossil fuels like petroleum. Not only are fossil fuels non-renewable, but they can also cause vast amounts of pollution too.

What’s worse, the production of plastic bottles isn’t the only part of its life cycle that requires a lot of energy usage. The transportation of bottled water, storage, and even disposal processes require a lot of energy as well.

In fact, in the United States, it is estimated that 76 million barrels of oil are needed to manufacture, transport, store, and dispose of the bottled water used in a single year (2016). That’s enough oil to fuel 4.3 million cars for a whole year!

Our use of plastic bottles and our reliance on bottled water leads to lots of unnecessary energy usage, and leads to pollution through the use of fossil fuels during the production process too.

Plastic bottles are made from a plastic known as PET (polyethylene terephthalate), which is recyclable in almost all recycling programs.

The problem? Only about 30% of PET is recycled in the United States. This means that most plastic bottles don’t end up recycled and turned into new plastic items. Instead, they get thrown into the landfill, or worse, they get littered and end up in water bodies like the ocean.

What are the effects of plastic pollution, and what makes them so bad for marine ecosystems?

Well, when pieces of plastic break down into small pieces in the ocean, they start releasing toxic chemicals into the water.

Furthermore, small pieces of plastic that have been broken down can be mistaken for food by fish, birds, and marine mammals. When this plastic is swallowed, it could clog up an animal’s digestive system, or even choke them to death.

Here’s how you can help with our bottled water problem

Of course, the one simplest way to get rid of plastic bottle pollution is to stop buying beverages that are contained in plastic bottles. There really is no need for bottled water. After all, it’s just packaged water in a bottle, and for most parts of the developed world (like Canada and the USA), water is pretty much free in the form of tap water.

You may think that tap water is dirty or unsafe, but get this: In both Canada and the USA, tap water is held to a higher safety standard than bottled water! As long as you don’t live in a rural area, your city’s tap water will generally be completely safe to drink. You can also use a water filter to filter tap water to make sure that it’s safe.

Overall, it is estimated that tap water requires 2000 times less energy than bottled water to produce. That’s a lot of savings in energy, and is a much better choice for the environment.

What’s more, you can buy a refillable and reusable water bottle to keep you hydrated whenever you aren’t at home, or close to a source of water. Just fill up your reusable bottle with tap water, and you’re good to go.

Bottled water is more expensive and less eco-friendly than tap water. Yet, it isn’t even necessarily as safe as tap water, despite what you might think from those bottled water marketing campaigns.

It’s time to take action, and ditch the disposable plastic packaging of bottled water. You’ll help the environment, and save a lot of money at the same time. It’s a win-win situation.