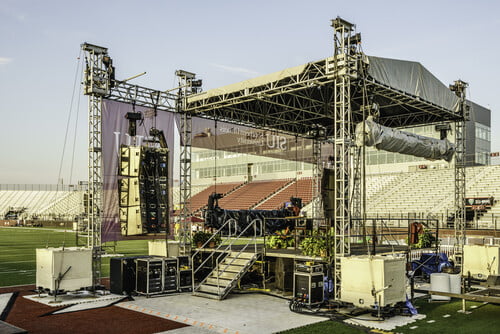 Large sporting events often involve the construction of new buildings to accommodate events and fans. Take the Olympics, for example: whole “Olympic Villages” are often built, with athlete accommodation and visitor attractions and facilities. And then of course there are often new stadiums for various sporting events – which introduces the need for more modular buildings.

And this happens every four years. Recently, many have begun to question the environmental impact of large-scale sporting events.

One increasingly popular solution for lowering said environmental impact is the use of modular buildings that are demountable and prefab and are made from recycled and recyclable materials.

Just how big is the impact of constructing new premises for sporting events?

Any construction project undeniably has an impact on the environment – usually a negative one, unless special measures are taken to balance out resource consumption and carbon emissions. Even though the environment was made into the “third pillar” of hosting the Olympic Games by the IOC back in 1996, there is still a long way to go.

Unfortunately, many countries see hosting big sporting events as a chance to be competitive and impress the rest of the world at the expense of the environment. So we often see lots of new buildings popping up, only to be left unused after the event.

Constructing new buildings costs the environment in a variety of ways: the manufacture of new materials, the consumption of energy on site, the carbon footprint of vehicles traveling to, from and around the site, and the impact on local wildlife.

And often this is unnecessary. In Rio for example, a new Olympic golf course was constructed even though Rio had two elite golf courses that could have been used for the games.

While some people have radically called for the Olympics to always be hosted in the same place to avoid this issue, some countries have compromised by building some new sites but using some existing infrastructure. The first shift in this direction was the Los Angeles games in 1984, which used a mixture of new-build and existing facilities.

It is however, inevitable that while large sporting events move around different host cities, some new constructions will be necessary. After all, there are often millions of people flooding to such events.

And this is where modular buildings can come in to soften the environmental blow.

So, what makes modular buildings eco-friendly?

Modular buildings, sometimes called temporary or demountable buildings, are produced offsite in a factory and then transported to site and slotted together. In this controlled setting, Computer Numerically Controlled (CNC) machinery is used to make the building components. The machine tools are controlled by computers, which means that materials can be cut very closely and precisely. Minimal waste is created and the margin for error is much smaller, meaning there are fewer incorrect pieces to be disposed of.

Any small amounts of waste created in the form of offcuts can be recycled in-house by the company. When you compare this to traditional, on-site methods of construction, there is much less waste created and there is no risk of a third party removing the waste and it ending up in landfill.

Unlike with traditional building, modular buildings are fully constructed in the factory and then transported to the site for final assembly. Some of these are even fully complete and simply need to be placed on the ground at site via a crane. Others are built into components at the factory and put together onsite.

The carbon emissions from different vehicles traveling to and from the building site over a long period of time are therefore eliminated. The speed of the projects and also the amount of control also contributed to a reduced overall environmental impact. And as mentioned, factory construction also allows control over the amount of waste produced and how it is disposed of.

So rather than wasting lots of materials and energy on the large-scale construction of Olympic villages and the like, governments and organizations could instead turn to demountable modular buildings that can be recycled afterwards. In fact, some have already begun doing so.

The London 2012 Olympic Games were hailed by many as green games, being much more carbon-neutral and low-waste than previous games. According to an article in the Independent, the largest element of the Olympics’ carbon footprint is the “embedded carbon” of the stadium due to sourcing the materials and construction. To combat this, the London Olympics organizers opted for recycled materials and temporary, modular structures where possible. This made a significant contribution to the 20 percent reduction in the games’ carbon footprint from the original estimate.

When Germany, who are world leaders in environmental protection, hosted the FIFA World Cup back in 2006, for example, they also used temporary buildings as a solution. They placed large prefabricated buildings along the banks of the River Main in Frankfurt so that fans could gather to watch matches on big screens. Afterwards, the buildings were taken down and the parts could then be reused and recycled.

These events are great examples of how temporary buildings can be used to make sporting events more eco-friendly. Hopefully they will be used more prevalently, alongside a range of other methods, to mean that we can all enjoy these events without them taking their toll on the environment.