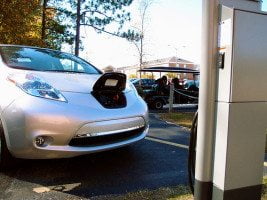 The Green Myth About Electric Cars

The statement that electric cars are not green may make great headline bait, however it is poor math.  The following is how the argument goes, over and over again.

There are higher manufacturing emissions on electric cars than there are regular cars.  In addition, electricity is used by electric cars, which has a footprint of its own.  When these two factors are put together they form a ‘dirty little secret’ where any climate benefit that electric cars enjoy are negated.  Look at this recent piece from Wired.

So once and for all, let’s clear all of this up.

The juice is what it is all about.

One of the more irritating things about the articles that discuss electric car emissions is due to how it is always portrayed in a very black and white manner.

There is the ‘zero emissions’ team in one corner and the ‘worse than combustion’ gang in the other.

However, real life, as always, is shades of grey.

Even after the larger manufacturing footprint that an electric car has is taken into account, it is still centres around the fuel mix of whatever power is used.  In other words, ‘the juice.’

Nothing is done to help cut emissions when electric cars use coal powered electricity.  When natural gas electricity is used, it is a top hybrid that uses low carbon power.  This results in less than 50 percent of total emissions from the finest combustion vehicle, including manufacturing.

In a recent study entitled ‘Shades of Green: Electric Cars’ Carbon Emissions Around the Globe,‘ electric car emissions that were grid powered were calculated in twenty countries.  However, there was data for a number of other countries that weren’t included.

So let’s break down the data so that this thing can be put to rest.

The map compares carbon footprints for electric driving that uses average grid electricity in approximately 40 countries.  The electricity’s actual carbon intensity that you might use is different than what the national average is for several different reasons.  However, it does make an excellent starting point.

The results are given in grams of the equivalent carbon dioxide per kilometre of a vehicle (g CO2e/km).  Every estimate includes grid losses, upstream fuel production, power station combustion and emissions from automobile manufacturing.

The specifications are based on a complete electric vehicle, which is similar to the Nissan Leaf.  It used each country’s average fuel mix for 2009.  For every country, it has assumed that vehicle manufacturing emissions were 70g CO2e/km, which was based on several studies that the report detailed.

“In Paraguay nearly all emissions come from manufacturing vehicles, since power is very low carbon.  In India is breaks down as 70g on grid losses, 30g on fuel production, 200g on power plants and 70g on vehicle manufacturing” according to Ian Beevis of Traders Insurance.

The colors from the legend split up the countries into five separate groups, which is based on their carbon intensity.  As can be seen, even once vehicle manufacturing has been included, carbon intensity from driving electric cars differs 5 fold depending on the juice.

For reference purposes, the average gasoline vehicle in the U.S. is at around 300g CO2e/km.  Once fuel production, fuel combustion and vehicle manufacturing is included, a new hybrid may manage 180 g CO2e/km.

Since grams per kilometer is a strange metric it’s very nice converting them into results that are more familiar.  When we work backwards from this data we are able to estimate what kind of regular vehicle (if any) might produce similar emissions.

Let’s refer to this as ‘Emissions equivalent petrol car,’ for lack of a better phrase.

It is much easier now to get a good grip on the figures.

In coal heavy South Africa, Australia, China and India, electric cars utilizing grid power are similar to typical gasoline vehicles, and are within the 25-30 MPGUS range.  In Italy, Japan, Germany and the UK, they are as good as the finest petrol hybrids, and within the 45-50 MPGUS range. However, in low carbon supply countries like Norway, Switzerland, Brazil and France, they are in an entirely different league, and average well over 100 MPGUS equivalent emissions.

It’s very important to keep in mind that the electricity that you receive may not match what the national average is and there could be several different reasons for this.  The night time intensity may vary, you may have solar panels or you might live in a country such as the United States, where in actuality the grid is really a group of separate grids.  In Colorado, for example, an electric car that is grid powered is equivalent to around 30 MPGUS, while in California it is around 70 MPG.

In the map, for all of the comparisons, the vehicle manufacturing is only 40g CO2e/m for a gasoline car.  For electric vehicles, on the other hand, it is 70g CO2e/m.  That is due to the fact that we have accounted for an electric car’s lower lifetime mileage and greater manufacturing footprint.

Check the full report out if you would like to know more about the details.  Included are comparisons with diesel vehicles, vehicle performance, sensitivities to manufacturing and breakdown of all figures.

Electric vehicles are as green as the juice is

Electric car critics love putting the horse before the cart and talking about manufacturing emissions.  However, they don’t ever appear to offer better solutions ever.  If they happened to be going on about joys of bicycles, electrified public transport or urban densification, than perhaps their critiques might ring true.  However, that isn’t what you hear.

In terms of commercial scale, electric cars are fairly new, and must deal with issues such as charging speed, range and cost.  Improving batteries can help all of them.  Despite that, great hope is offered when it comes to limiting noise pollution, making improvements to local air quality and reducing carbon emissions.

Electric cars are definitely not perfect.  There are numerous ways that they can be critiqued in a valid manner.  However, when it comes to carbon emissions, a gasoline vehicle will be unable to compete with electric cars.  There is no contest.

If an electric car is given the right juice, it will crush combustion engines.