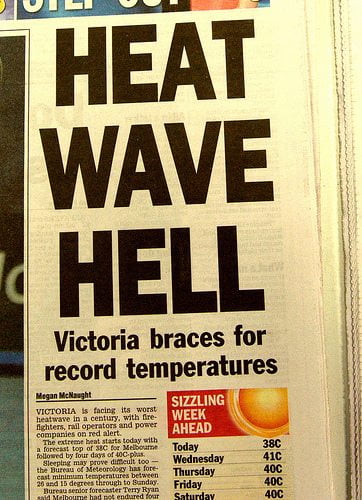 Global warming will make Australian heatwaves, like the one that hit the country in January, five times more likely to happen, according to new research.

In a study called Anthropogenic contributions to Australia’s record summer temperatures of 2013, researchers used more than 90 climate model simulations to understand the extent of the contribution of anthropogenic (human-caused) greenhouse gas emissions on the extremely hot Australian summer, when the country experienced record high temperatures.

In January, temperatures reached peaks of over 40C, with some areas reaching 48-49C. Although heat waves occur regularly across Australia, last summer was far too hot to be considered normal.

According to the research, natural climate variations or phenomenon like El Niño are not sufficient to explain the unusual season. By using different models, it found, “There was at least a 2.5 times increase in the odds of extreme heat due to human influences using simulations to 2005, and a five-fold increase in this risk using simulations for 2006–2020.”

The researchers said, “We cannot categorically ascribe the cause of a particular climate event to anthropogenic climate change; however, the roles of various factors contributing to the change in odds of an event occurring can be identified.”

In April, a study by the Australian Climate Commission found that the country would be facing increasingly extreme weather events such as heavy droughts, heat and rainfall, because of climate change.

Meanwhile, a recent report by the United Nations World Meteorological Organisation (WMO) revealed that the last decade could be characterised by a series of weather records and extremes, such as hottest temperatures and record ice melt across the world.