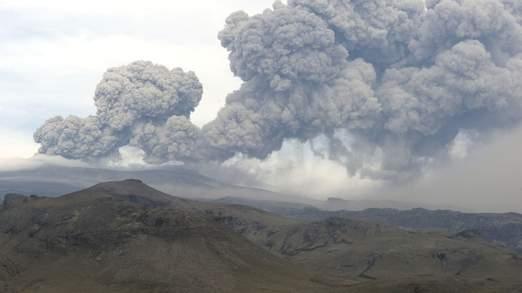 Swarms of seismic activity in and around an Icelandic volcano have caused authorities to raise the eruption alert to the second highest, with magma levels remaining stable.

The volcano presents signs of “ongoing magma movement,” stated authorities, which fear an eruption similar to that of Eyjafjallajökull volcano in 2010 that caused a giant ash cloud affecting European airspace.

Earthquakes have been registered coming from the volcano, “the strongest yet measured in the region since 1996,” said Iceland’s Met office.

The Bardarbunga volcanic system is located under the north-west region of Iceland’s Vatnajokull glacier, with the strongest seismic activity happening last week.

The announcement of an orange alert means the volcano is showing “escalating unrest with increased potential of eruption,” or is erupting without any major volcanic ash emissions or magma.

An imminent eruption of magma or gas emissions would convene a red alert, as the potential damage of gas emissions into the atmosphere are considered to be highly worrying. The eruption in 2010 caused huge aviation disruptions, with thousands of passengers being affected by flight restrictions.

The met office have also stated, “Presently there are no signs of eruption, but it cannot be excluded that the current activity will result in an explosive subglacial eruption, leading to an outburst flood and ash emission.”

A recent UK Cabinet Office report published earlier this year suggested that the single greatest threat to the UK is the eruption of an Icelandic supervolcano.

The conclusions were partly based partly based on the eight-month eruption of the Laki volcanic fissure in southern Iceland that began in 1783 – which killed one in four Icelandic inhabitants and millions worldwide due to toxic gas clouds.